To a considerable extent their relationship was regarded as a challenge to traditional gender roles and it indeed did not conform to stereotypes that are usually attributed to men and women in a heterosexual relationship. Lady Hamilton was so obviously lacking in the subservience and passivity expected from women in that era that authors over the course of time started to exclude her in their accounts of the public sphere by reducing her to a private weakness of Nelson’s, who could be successful at sea, where he was far away from the enthralling influence of a manipulating woman.

The letters in this edition testify how Admiral Nelson’s life at sea was not exclusively public nor was Lady Hamilton’s life ashore solely private. It also shows how the two supposedly separate spheres of male and female lives were connected. A fresh approach and a thorough discussion of this important and neglected aspect not only of Nelson’s life, but of gender history, demands this exact and scholarly edition of the primary material, which consists of about 400 letters that Nelson wrote to Lady Hamilton over the course of the last seven years of his life and about a dozen letters of her to him that have survived.

This final article in this series on Robley Browne focuses on his life as a ship’s surgeon following his retirement in 1919, at the age of fifty five, after a thirty year career in the Royal Navy.  These extracts from his diaries and photograph albums demonstrate the striking similarity between the job of a surgeon in the Royal Navy and surgeon on the largest trans Atlantic ocean liners of their day.  There were also major differences, which tested the capabilities and character of the most versatile of medical practitioners.   His diaries provide insight into many aspects of the 1920’s, including mass immigration to North America, Prohibition, communications and travel, sociology, and also the lives of many of the “rich and famous” of the time.

Part I: Declaration of War off Montevideo, June-August 1914

Part III: The Sinking of the Dresden, March 1915

A BALL ON HMS BLONDE ANCHORED IN CONSTANTINOPLE, 4 NOVEMBER 1829.

An account by Captain Edmund Lyons of the frigate Blonde of an ambassadorial ball held for Turkish officials during the Greek war of independence.

VICTOR HUTLEY’S DIARY OF THE 1925 ROYAL TOUR OF AFRICA AND SOUTH AMERICA, IN FIVE PARTS.

The 22-year-old Victor ‘Dick’ Hutley records his voyage as part of the Royal Tour of West Africa, South Africa and South America from the sick berth of the battlecruiser, HMS Repulse.

Part 1: Departure. A voyage from Portsmouth to Tenerife.

THE CAPTURE OF THE ROSE

A translated Dutch account of the capture of the Rose cutter, 13 October 1800. The Rose was the first ship to be captured by the Dutch after the inception in 1795 of the Batavian Republic, a client state of the French Republic 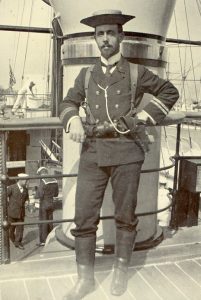 We will soon be publishing a five-part article based on the remarkable diaries of Surgeon Captain Robley Browne. Robley Browne was born in London on August 4, 1863. After six years of medical training at Guy’s Hospital, in London, from 1882 to 1888, he joined the Royal Navy, where he spent his first two years on board training ships. For the next thirty years, Robley led an extraordinary life in the service of his country, as surgeon on board a number of ships.

The posts will be themed on the taking of the Taku Forts in 1900, Robley’s fascinating experiences of naval sporting events, Robley’s service on the Royal Yacht, his travels in Kroea, China and Japan and finally on his post-war life as a surgeon on Ocean Liners. His diaries are rich with important historical detail and are a joy to read, and they are all illustrated with images, maps, sketches and photographs.

The Robley Browne Diaries Part 6: A Surgeon in Retirement

This article presents a variety of diary excerpts and images from the diaries of Surgeon Captain Robley Browne that illustrate how his ....

This post presents Part III of a series of excerpts from the fascinating diary of Samuel Hobbs. Part I described his experience of the ....