This post continues exploring the records kept by Captain Edmund Hooper after the fall of Singapore in 1942. Part I presented a brief biography of Hooper and the official Admiralty report of the sinking of HMS Jarak. Part II presents Hooper’s sketchbook, which includes images of the sinking as well as detail of his subsequent experience as a prisoner of war.

Once Jarak had been scuttled by Hooper and his crew, they took to their lifeboats, rowed ninety miles to Sumatra and traveled 200 miles overland through mosquito ridden jungle from the river town of Tembilahan in the east to the port of Padang in the west. There Hooper and nine other British officers commandeered a native fishing boat and set sail across the Indian Ocean for Ceylon with nothing but a Dutch school atlas for navigation. With meager provisions and torn sails they managed to cover over 700 miles before unluckily running into three passing Japanese ships. They were captured and returned to the infamous Changi jail in Singapore.

Hooper remained in Changi jail for six months in appalling conditions with 50,000 other starving POWs before being transported north to work as slave labour on the Burma-Siam railway. He survived three years of near starvation, disease and torture in a Japanese concentration camp at Chungkai, laboring until the end of the war on what became known as the ‘Death Railway’, including work on the bridge over the River Kwai.

Whilst a prisoner of war Hooper recorded his experiences of the war in a series of drawings on scraps of paper which he buried in a bottle – that somehow found its way back to him in Singapore several years after the war.

After his release from the Japanese concentration camp, and with the help of the Red Cross, Hooper was reunited with his wife and three children in Durban, South Africa.

For Hooper’s official account of the attack and general background please see Part I of this post.

These images are dated July 1943, and were therefore made some time after the event.

Image 1 appears to be the first in the sequence, chronologically speaking, one suspects not long after the captain had ordered the colours broken out and allegedly sent his ‘British minesweeper – so what?’ message, in response to the Japanese request to identify himself.

Note the four cruisers of the 7th Cruiser Division are further off, with an aspect change on the lead ship, suggestion that she is already in the process of being detached, while shell splashes cluster off the port bow of Jarak, while she takes evasive action (the zig-zag wake is noticeable in both this and image 2).

The shell splashes appear relatively small for 8in guns (the main armament of the Mogami Class). One must be cautious  not to read too much into drawings done from memory, but this, plus the survival of the ship, could suggest that the Japanese engaged with their secondary armament 5in guns only, as 8in hits would have caused catastrophic, fatal damage. On that note it is possible to question the presence of the torpedoes that seem to be depicted passing either side of her. Torpedoes were, of course, monumentally expensive and it is perhaps unlikely they would actually have been fired at so lowly a target – and certainly not if they weren’t inclined even to fire the main armament at her.

Image 2 shows Jarak being bombed by a Japanese aircraft, with her 6lb gun blazing away while a Japanese ship is detached from the squadron to finish her off in the engagement on 14 February. There is some uncertainty in the accounts as to just which Japanese ships were attacking her. The Chief Engineer’s testimony is clear that the attack was launched by Vice Admiral Jisaburo Ozawa’s full, main force, including the light aircraft carrier Ryujo, Ozawa’s flagship, the heavy cruiser Chokai and the four Mogami Class heavy cruisers of Rear Admiral Takeo Kurita’s 7th Cruiser Division, plus destroyers. The aircraft shown here, therefore, might well be an aircraft from Ryujo and one of the destroyers is in the process of being detached to finish Jarak off.

Image 3 appears to be a conference on the wrecked bridge among the volunteers who had returned to the abandoned Jarak on 15 February in search of food and provisions, but instead, finding her engines still working, decided to sail her to the island they had taken refuge upon, pick up the rest of the crew and make their escape.

The suggestion from the sketch, however, is an attack from just four ships – which equates to the four Mogami Class of the 7th Cruiser Division, with one of their number detaching to finish her off, making it possible that the aircraft is actually an Aichi E13A “Jake” floatplane from one of the cruisers, which could carry up to 500lb of bombs when on armed reconnaissance.

The Images of Prison Life – by Jenny Wood

Hooper’s drawings, in pencil and on sheets of paper which have obviously had a life, are another part of the extraordinary jigsaw which was the experience of artists as POWs in the Far East (FEPOW).  He had obviously had some training – his figure-drawing is confident and the proportions correct, and ‘shading-in’ some of his backgrounds or giving a border to his work suggests an arts perspective.  He documents scenes which other artists also drew which gives extra veracity to drawings where few photos or any film survive to tell the visual tale.

Chungkai was a FEPOW hospital camp serving the Thailand area and, as such, grew larger as sick and infected FEPOWs could no longer work in the up-country railway camps.  It was one of the centres where military medics such as the Australian Major Moon called upon the available artists to document medical concerns, procedures and improvised equipment.

Hooper’s drawing of blood transfusion falls into this category, detailed enough to show exactly how the apparatus should operate, specific enough to show the bamboo arm-rest of the recipient.

Part of the FEPOW experience was to have to build, often from scratch, their own accommodation.  The jungle clearing party is likely to date from the early days of this life as the men are not emaciated and still have standard shorts – not the ‘jap-happy’ loincloth which numerous prisoners later wore.

The drawing comfort before building also recalls this time where prisoners were packed together in temporary shelters while their communal huts were built.

Many drafts of prisoners made the rail journey from Singapore to the staging post of Ban Pong where men waited to be sent further north and west to railway construction sites or east to the working supply camps.  The drawing ‘The’ Railway shows this limbo, waiting by an empty railway line.

Barges were commonly used as the river was a more reliable way of transporting food and goods while the railway was under construction and the supply barge would have been a common sight.

In daily camp life, the norms of military life were observed.  The drawing of the Chungkai barber shop shows an un-regarded but necessary aspect of camp life.  As we recognise again in Lockdown not only did men psychologically need to regain the image or sense of themselves but there was the overwhelming heat of a bushy head and also the need to discourage infestation.  Hooper’s drawing shows the sociability of the experience – men able to sit and talk while awaiting their turn.

A sadder image is the drawing of Chungkai’s camp cemetery.  As discussed in the book*, (p265/6) the military observed, where possible, the dignified burial of the dead.  By May 1944, when the drawing was done, the graveyard was huge and had begun to resemble First World War CWG sites, with bushes planted to outline the march of the graves.  The drawing captures both the regimented aspect and the eternal – planted under the shade of a big tree the earlier graves lie quietly as the new graves sit ready. 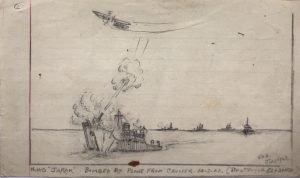 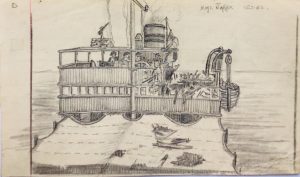 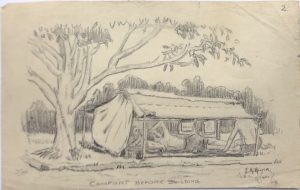 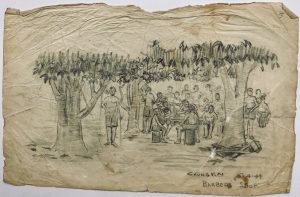 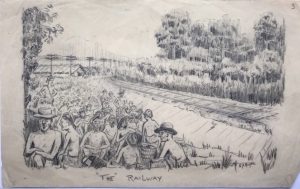 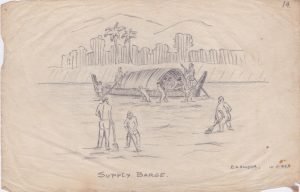 and 34 Special Force officers bound for Batavia. – The next day ‘Jarak’ steamed into

3 Cruisers and a Destroyer of the Japanese Navy.

17th February 1942  H.M.S. Jarak’s severely damaged engine finally dies, leaving Captain Hooper no choice but to scuttle his ship and save his crew.

Typical shack built by prisoners for their accommodation while labouring on the railway.

Chung Kai Prison Camp Cemetery 1.450 graves. Some with more than one body.  An average of 15 prisoners died every day. 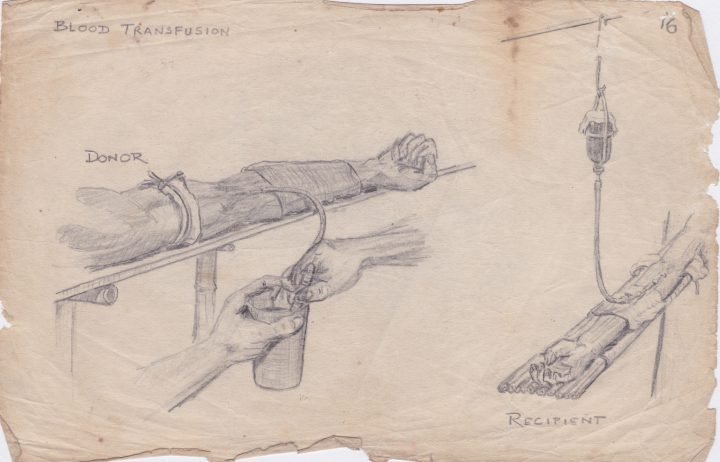 Michael Edmund Keppel Hooper is the son of Edmund Hooper. He was born in Singapore on 13th January 1942 during one of the heaviest Japanese bombing raids on the city. Michael was evacuated  three weeks later with his mother and two siblings to South Africa, where they spent the rest of WW2.  His father meanwhile was declared ‘Missing in Action presumed dead.’ Seven months later, however, the Red Cross advised that he had been interned in a Japanese Prison Camp on the Burma Siam Railway. Happily Michael’s father survived and they were reunited in Durban before returning to Singapore in 1945. There he remained until he was ten by which time he was fluent in Cantonese and Malay. He was then despatched to boarding school in England for 8 years to brush up his English. On completing his education, he returned to his family in Singapore. Then after three years training, he began a career in commerce, with postings to Ipoh and Penang in Malaysia. Since then he has lived in 9 countries and visited 51 others in a 30 year career as a Management Consultant. He now lives in Venice.

View All By Michael Hooper