Watercolours from the China Station, 1920s

A series of watercolours by Lieutenant W.J.A.Willis, CGM., MM (f.) sent to his three-year-old son Derek from HMS Carlisle on the China Station in May 1926.

HMS Carlisle was one of a series of light cruisers built to serve in the North Sea around the time of the First World War. She was one of the last series of the ‘C’ class cruisers, being launched from Fairfield on the Clyde in July 1918. She displaced 4190 tons and mounted 5x6in and 2x3in guns and made 29 knots. She entered service after the War and was assigned to the 5th Light Cruiser Squadron, serving on the China Station. By the time of the Second World War, she was an ‘over-age’ ship and, in view of the looming maritime air menace, along with several other light cruisers of her vintage, she was converted to a new type – the anti-aircraft cruiser, equipped with 8x4in and lighter guns; this pushed her displacement up to the 5000-ton mark. She served honourably with the Mediterranean Fleet, chiefly in the eastern basin, where she escorted many convoys and took part in numerous amphibious operations. She was badly damaged by bombing in the operations to re-take the islands around Rhodes in October 1943 and, though salved, she finished her career as a base ship in Alexandria, having been declared a ‘constructive total loss’ (at that stage of the war, she was not considered worth towing home for extensive repairs). She was broken up in Egypt in 1948-49.

Britain had been the pioneer in ‘opening up’ China to Western trade, missionaries and influence in 1791. Several one-sided wars later, the British had acquired Hong Kong (1842) and, on the Chinese mainland itself, Wei-hai-Wei (1898). While Britain remained the principal foreign power in China, she had been joined by 1900 by several more – European nations, Japan and the United States. They were able to do much as they pleased, faced by a now-backward and feeble Chinese Empire (a republic after 1912, but that led to greater enfeeblement and more divisions). By then, foreign powers had gained definite ‘concessions’ in China’s port and river cities, administrative controls, trade privileges, investment opportunities, and industrial enterprises. They also enjoyed ‘extra-territoriality’ (i.e., that their citizens had to be tried in the nation’s own courts, rather than those of China).  Their missionaries and teachers were widely distributed across the three million square miles of Chinese territory. Though the trade of China with other nations did not begin to match that of any of the industrialised countries with each other, the twentieth century was often regarded as ‘China’s century’, when her vast potential would be realised.

By 1926, China was in a mess, politically speaking. The central government had been fading for nigh on a hundred years and the ‘foreign devils’ were not alone in exploiting this growing weakness, for there were many ‘war lords’ – regional strong men, with their own armies. It was necessary for the foreign powers to subdue or treat with these regional entities. Below their regional presence (often temporary and nominal) society was fractured and often lawless. An attempt was made by the new leader of the Kuo Min Tang (Chinese Nationalist Party), the nominal government, Chiang Kai Shek, to unify the country and assert his authority, not least over the emerging Chinese Communist Party. He enjoyed a measure of success between 1926 and 1937, when the Japanese, worried by his growing might, engaged in a long, brutal, exhausting and undeclared war against China.

There was thus much for the Royal Navy’s China Station to contend with in the 1920s. The fleet there was a strong one, though it never had battleships. It usually boasted a carrier, several heavy cruisers, a squadron of light cruisers, destroyer flotillas, submarines, sloops and light craft. The ships could navigate China’s broad, deep rivers, which penetrated several hundred miles into the hinterland; thus ships normally seen on the high seas were now to be found deep in China’s interior. They were projections of Britain’s power, protecting British nationals and their businesses, and often spearheading small military expeditions. Much of their time was spent patrolling the mighty rivers, rescuing Jardine Matheson and other merchant ships from pirates, who were a constant and often wily nuisance, fond of taking foreign nationals hostage.

A posting to the China Station might be considered exotic – and these pictures certainly convey that sense of ‘difference’ and novelty – but it was no sinecure, for there was plenty for Carlisle and her sisters to do in showing the flag, rescuing British and other non-Chinese from piracy or other acts of lawlessness, and protecting Britain’s extensive economic interests. It was a very different world from that at home – and from that of today.

[Show slideshow]
These watercolours were painted by the Great-Grandfather of Dr Sam Willis, editor of navyrecordsonline.co.uk 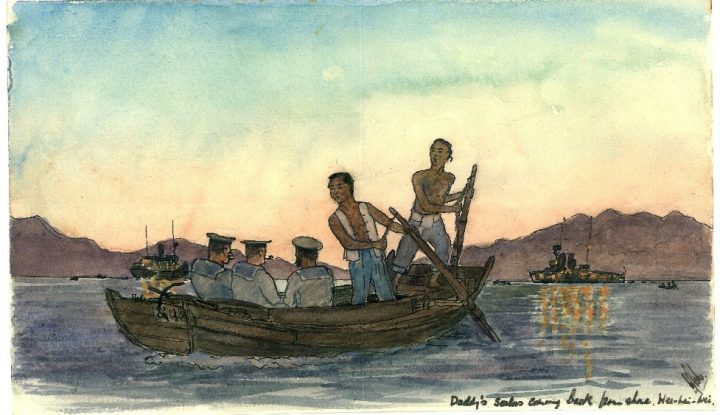 Michael Simpson has edited the Somerville Papers, the Cunningham Papers (2 volumes), and two books on Anglo-American Naval Relations for the Navy Records Society, in addition to writing a biography of Viscount Cunningham and numerous essays and articles.

He is editing currently a further volume on Anglo-American-Canadian Naval Relations taking the story up to 1945. He was educated at Cambridge, Ohio State and Glasgow Universities. He was a Reader in US History at Swansea University

View All By Michael Simpson