A personal account of the mutiny at Spithead in 1797 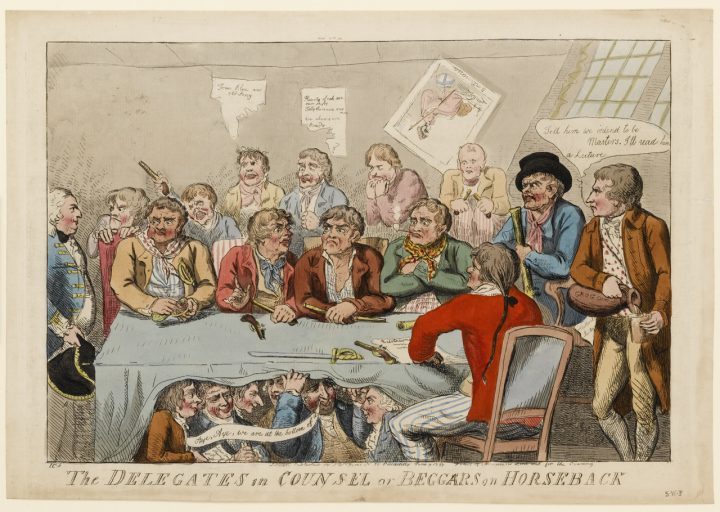 This month the Members’ Blog commemorates the 90th anniversary of the Invergordon Mutiny, delving into the NRS archives to showcase accounts of similar occurrences throughout the history of the Royal Navy.

On 15th September 1931, crews in several ships of the Royal Navy’s Atlantic Fleet refused to obey orders to put to sea for planned exercises from the anchorage at Invergordon. News of the Government’s plan to impose spending cuts which affected public sectors, including the Admiralty, had spread amongst the fleet, with discontent fanned by agitators amongst the ratings of the lower deck, many of whom faced a reduction in pay of up to 25%.

In this extract, we focus on a similar event during the French Revolutionary War of the late eighteenth-century, when grievances over pay escalated to open mutiny amongst ships of the Channel Fleet gathered at Spithead in April 1797.

On our arrival at Spithead, the latter end of April 1797, we found the fleet in a high state of mutiny. We had orders to fit for foreign service, and I had directions to go with a party of seamen and marines to the dockyard for new cables and stores. The mutiny, which in some measure had been suppressed, broke out afresh on board the London, 98, Vice-Admiral Colpoys, and some of the mutineers were killed ; but the officers were overpowered and the admiral’s flag struck by the scoundrels, and the bloody flag of defiance hoisted in its room.

I went with my party to the yard in the morning and began to get off the stores, when a marine said he would not assist in rousing the cable into the lighter and advised the others to knock off; upon which I told him if he did not immediately take hold of the cable with the rest I would cut him down (which was my intention). This had the effect and he went to work with the others.

When I got on board our men were in a state of mutiny, and every ship at Spithead and St. Helen’s the same. I had the first watch that night, and the master relieved me at twelve, and everything seemed quiet; but about three bells in the morning watch I was sent for by the captain, and on my coming on deck I found the ship’s company assembled there and the captain, in the most impressive manner, requesting them to return to their duty, but all to no purpose. Had we been the only ship, we should soon have driven the scoundrels to the devil ; but as we were situated, surrounded by line-of-battle ships acting in the same disgraceful manner, it would have been of little use to resist. About six a paper was handed up to the captain with the following order in writing:

‘ It is the unanimous opinion of the ship’s company that Captain Bazely, Lieutenants Hickey and Gardner, Mr. White, the purser, and Messrs. Kinneer and Alien, midshipmen, are to quit the ship by 6, or violent measures will be taken to enforce the order.’

Soon after 6 the barge was manned and armed ; every vagabond had a cutlass, and our trunks were handed in, with orders from the delegates not to carry them anywhere for us. I had a brace of pistols with a double charge which I put in my great-coat pockets in case I should want their assistance. It was blowing a gale of wind at NE when we left the ship, and near ten o’clock before we landed on Point beach ; our things were handed out, and I desired the bowman and one or two more, who I knew to be great scoundrels, to take them to Turner’s (living on the beach, and only a step from the boat) shewing them at the same time my pistols and saying, ‘ You understand me.’

They then most reluctantly took our things to the place I directed. This was all I wanted, as I heard some of the ringleaders say as we were quitting the ship ‘ that if any of the boat’s crew assisted in taking our things to any place after landing they should be severely ducked on their return’ ; and they were as good as their word ; for those fellows got a fine ducking the moment they got on board, the others having reported them.

Neil Jackson is the Editor of the Members’ Blog, and a serving warrant officer in the Royal Navy. He has a BA(Hons) in History from the Open University.