Battling against ice and wind on the Northern Patrol 1914-1918 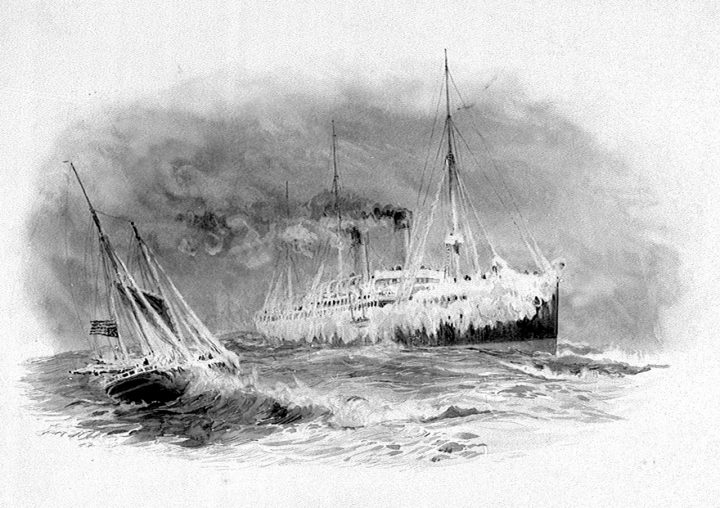 By 1915 it was realised that the First World War would not be a short one, and that blockade would therefore form a vital role in Britain’s strategy for victory. The Tenth Cruiser Squadron, which formed the Northern Patrol, had the crucial task of denying enemy trade the use of the seas above Great Britain. Its original cruisers, the 1889-90 Edgars, were not only vulnerable to enemy attack, but also had been designed for calmer waters and could not cope with the North Atlantic. The first extract, from the journal of Commander Harold T. Bowen, vividly describes the problem.

Only mine and torpedo had added two new dangers which few of our ships had been built to resist. The Edgar and her sister ships were particularly vulnerable. They were the oldest ships that joined the Home Fleet, and they were so little subdivided that it required only one mine or torpedo to send them instantly to the bottom. The weather that autumn was very bad and gradually the old ships got knocked to pieces. I remember one night when I had been on the bridge practically all day, and the Captain sent me down to my cabin about midnight to try to get some rest. It was blowing a full gale and it looked doubtful if the ship would weather it. My cabin was on the upper deck (in the after superstructure) and I lay down on my bunk in my clothes and being very tired I dozed off. I was awakened by a terrific crash and my cabin door was burst open and water poured in. All I could see outside was a swirling mass of foam on the upper deck. I thought the ship must be sinking. I swung myself out of my bunk and, up to my knees in water, waded up the slope through the doorway. The ship seemed on her beam ends and it looked as if nothing could save her. As I watched she slowly – miraculously – righted herself. A minute later another great wave swept her from stem to stern. It was then that a midshipman was carried overboard from the foremost gun and on over the nettings aft and laid almost at my feet. After that there was a lull and I could take in the scene. The gun crews were clinging to the guns or whatever they could hold on to, while live ammunition rolled with the ship across the deck … [W]hen dawn broke the weather moderated and we were able to take stock of our damage: one man lost, several injured, and one boiler room flooded, and all our boats either lost or damaged. When later in the day we were able to turn round and run for the shelter of our Shetland Islands base, we found in Swarbacks Minn some other ships of the squadron which had suffered even worse damage. The great gale put an end to the use of these old cruisers on the Northern Patrol.

Armed merchant cruisers, such as the White Star Line’s Teutonic, replaced the Edgars. Whilst in many ways an improvement, several proposed vessels were discounted or later paid off for their instability or vulnerability to torpedo or mine. Having moved his flag from Crescent to Alsatian, a former liner of the Allan Line, Rear-Admiral Dudley de Chair sought to implement the Order-in-Council of 11 March 1915. Cargoes to and from Germany were to be confiscated, which required rigorous examination of ships. This was difficult enough in the best of times, with neutrals including the United States of America needing delicate treatment for diplomatic reasons. In the height of winter, however, this task became virtually impossible. It is amusing to see how even the nationality of fish was questioned!

Of 57 Vessels intercepted and examined during the week, 22 were sent into port with, and one without Armed Guards. Exceptionally fine and clear weather was experienced.

Monday, 20th December – Hilary having developed defect in her Tail Shaft, due to engines racing in heavy sea, was sent to the Clyde for repairs and to complete with coal. Almanzora reported fresh water service pipes frozen and burst. The necessary stores for repair were ordered to be supplied by Cedric. A submarine was reported five miles SE of St Kilda, steering SW at ten knots on the surface.

Tuesday, 21st December – Otway intercepted the Norwegian Barque Skomvaer, Buenos Aires to Flekkefjord with Quebrache. She was sent to Kirkwall with an Armed Guard … Almanzora intercepted the American Steamer A.A. Raven, New York to Archangel with military and medical stores. She was directed to call at Alexandrovsk.

Wednesday, 22nd December – Alcantara intercepted the Swedish steamer Urna, New York to Goteborg with general cargo. Seventeen of the crew had been shipped in New York. She was sent to Lerwick with an Armed Guard …The Glass fell rapidly, and the Southeasterly Gale increasing accompanied by heavy sea made boarding difficult, and in many cases impossible. Ships on patrol were obliged to heave to and could not make headway.

Thursday, 23rd December – Otway captured the Swedish steamer Carolina, New York to Gothenburg with Hides, Copper and general cargo. She was sent to Kirkwall with an Armed Guard … Patuca intercepted Norwegian steamer Frotz Smith with Oil-cake and Cotton-seed. She was sent to Lerwick with an Armed Guard. In both these cases great difficulty was experienced in boarding – Wind SE Force 8 – Heavy squalls of snow and hail. Met Almanzora in Lat. 62.47´N, Long. 6 W, and I personally visited her to see if the extent of the damage done to her fresh water service by frost necessitated her leaving patrol for repair. I found the pipes had burst in several places, icicles hanging from them; but considered temporary repairs could be effected.

Friday, 24th December – Ebro on G Patrol intercepted the Norwegian steamer Bergensfjord West bound with thirty bags of Parcel Mails duly certified as not being of enemy origin as laid down in C.I.O. 1316. She had 243 passengers including one German (male) aged 48; and her cargo, which was chiefly fish, was also certified as of neutral origin. Ebro was directed to remove the German passenger and allow the ship to proceed. The weather in A and C Patrol areas improved but boarding was still difficult, and in some cases impracticable.

Paul Harrison has taught at a Blackpool primary school for 35 years, and has always had a passion for history, especially Naval Aviation. He has recently started a PhD with Lancaster University to further his research into the Fairey Barracuda, a three-seat carrier-borne torpedo and dive bomber which saw extensive service with the Fleet Air Arm during the Second World War.