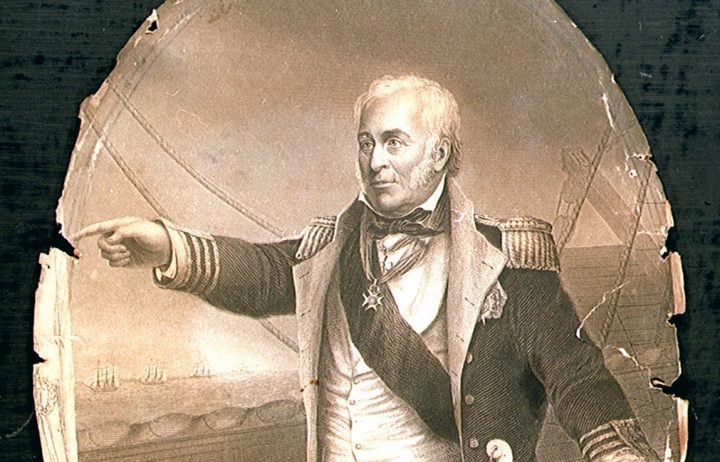 I came to this three-volume group at the beginning of my research career, in 1979. I had just begun a Ph.D under the direction of Professor Bryan Ranft, at King’s College London, and a great servant of the Record Society. After planning to research an early 20th century subject I developed an interest in the Baltic Campaigns of the misnamed ‘Crimean’ war, and the career of the Admiral Sir Charles Napier (1786-1860) whose command of the Baltic Fleet in 1854 ended in controversy.

The texts of these three volumes, an edited selection of the higher level correspondence between the Admiralty and the Commanders in Chief of the Baltic and the Black Sea Theatres, was created by the Admiralty in 1855-56 as a Cabinet print, in part to meet the well-founded complaints of Admiral Napier, who had entered Parliament for a second time as MP for Southwark and was asking awkward questions in the House. Napier was a long-standing friend of Prime Minister Lord Palmerston, which made the issue especially difficult. Copies can be found among the papers of some contemporary cabinet ministers. The volumes were produced during the Second World War, when opportunities for original research were limited, much as they are in 2020.

The volumes deal with every aspect of the naval war from the economic blockade to major amphibious operations, the siege of Sevastopol, the capture of the Aland Islands, the bombardments of Sweaborg and Kinburn, gunboat operations in the Sea of Azov and the Naval Brigade outside Sevastopol. The much larger body of surviving official correspondence from which they were drawn, can be read at the National Archives of the United Kingdom.

The Baltic material was edited by the Navy Records Society stalwart and Admiralty Librarian David Bonner-Smith, whose voluminous research notes survive in the National Maritime Museum archives. In the 1854 volume Bonner-Smith noted how the First Lord of the Admiralty, Sir James Graham MP edited the correspondence to promote his own agenda, ensure the public saw things as he would wish, while breaching the confidence of private correspondence with Napier to undermine the Admiral’s credibility in the Cabinet. Napier, and the Commander in Chief in the Black Sea Sir James Dundas, were sacrificed as scapegoats to disguise Graham’s responsibility for the failure to mobilise in good time, the lack of sailors and of ships, especially the gunboats and mortar vessels that were needed for offensive operations in coastal waters. Graham’s obsession with economical administration crippled the British war effort in 1854, his plans were based on the flawed assumption that allies would be found in the Baltic, to provide the manpower, local expertise and flotilla craft that were needed. He imagined using the same forces in two theatres, in successive seasons, whereas the war had to be fought in both consecutively. The failure to take Sevastopol in October 1854 exposed the folly of inadequate preparation, and ultimately brought down the Government. Graham left office for the last time in February 1855, and his reputation was badly damaged by Napier’s subsequent attacks.

While my Ph.D focussed on the Baltic campaigns, the book developed from the thesis examined the strategic direction of the conflict and the two primary theatres, the better to establish the significance of the Baltic at every stage of the war, from planning to post-war celebrations at a Royal Fleet Review at Spithead on April 23rd 1856, when a massive Baltic Fleet was assembled to demonstrate the power of the British state. I continue to work on the career of Admiral Napier, naval reformer, MP, mercenary, pioneer of new technology, author, and the man who fired the rockets in the American National Anthem.

I have chosen the last letter from the 1854 Baltic section (p.197) as a masterpiece of official obfuscation, hair splitting and straight-forward dishonesty.

The Secretary to the Admiralty to Vice-Admiral Sir Charles Napier. Admiralty, January 13, 1855.

Having laid before my Lords Commissioners of the Admiralty your letter of yesterday’s date, I am commanded by their Lordships to acquaint you that although my Lords upon some occasions have not been enabled to express the same satisfaction at receiving your reports which they have directed to be conveyed to you upon others, they have only to repeat that no censure has been passed upon your conduct in reference to the operations of the fleet under your orders ; and their Lordships have already expressed their sense of your exertions in a manner customary upon intimation that the flag of an officer of your rank has been struck in pursuance of their Lordships’ orders. They had also, in accordance with your recommendation, promoted the Flag Lieutenant who was the bearer of your despatches announcing the fall of Bomarsund ; and since your flag has been struck, the name of no other officer has been submitted by you.

My Lords do not feel themselves called upon now to enter a second time into discussion of reports on which they have already stated their opinions, and still less to take cognizance of other informal documents which have never been laid before them, and which they decline to recognize. They consider that no inquiry into your conduct is necessary, and they entirely decline to submit a controversy raised by an officer under their orders to the decision of a court-martial.

My Lords further direct me to inform you that, while they have been unwilling to pass censure upon any part of your conduct, they have not failed to observe, from the moment of your first quitting Wingo Sound without orders, and down to the present time, you have repeatedly thought fit to adopt a tone in your correspondence with their Lordships which is not respectful to their authority. Such a course, if generally adopted by other officers, would be destructive to the discipline and injurious to the best interests of the service, and is not calculated to inspire confidence in an officer entrusted with an important command.I am further directed to add that this decision is to be considered by you as final.I am, &c.

The Admiralty, still presided over by Sir James Graham, rejected Napier’s complaints, set out in the previous letter, and declared the issue closed. It was not… although the Admiralty’s actions did much to ensure the Baltic campaigns were largely forgotten, leaving the army’s chaotic Crimean campaign to define the entire conflict. This collection, and the expert editing it received, opened a new perspective on the past, and provided the foundation for more rounded national perspective.

Andrew Lambert is Laughton Professor of Naval History in the Department of War Studies at King’s College. His books include: The Crimean War: British Grand Strategy against Russia 1853-1856. (Manchester 1990, Aldershot 2011); ‘The Foundations of Naval History’: Sir John Laughton, the Royal Navy and the Historical Profession. (London 1997); Nelson: Britannia’s God of War. (London 2004); Admirals. (London 2008); Franklin: Tragic Hero of Polar Navigation. (London 2009); The Challenge: Britain versus America in the Naval War of 1812, (London 2012), winner of Anderson Medal of the Society for Nautical Research for the best maritime history book; Crusoe’s Island: A rich and curious history of pirates, castaways and madness  (2016) and Seapower States: Maritime Culture, Continental Empires and the conflict that has shaped the modern world.  (Yale University Press 2018), winner of the 2018 Gilder Lehrman Book Prize in Military History.