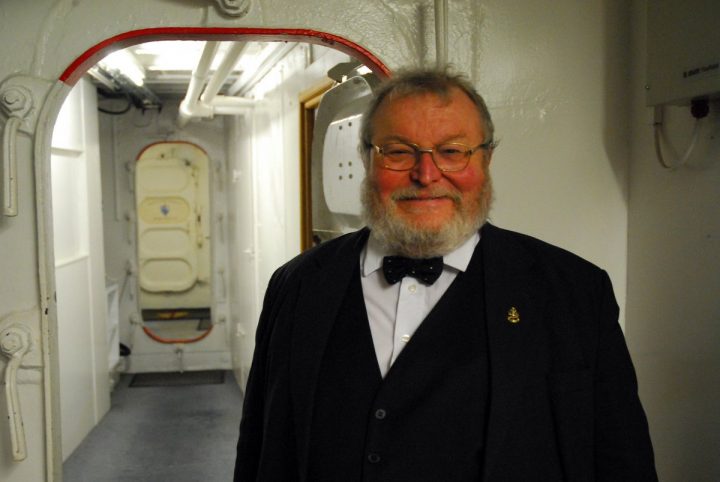 The Navy Records Society is deeply saddened to learn of the death of Professor Eric Grove on 15 April 2021, at the age of 73.  Eric was a long-standing member of the Society and had served multiple terms as Councillor.

Eric was a character in the best sense of the word; a larger-than-life personality, with his trademark bow tie and forthright, energetic manner.  He was also a formidably clever man, an endless source of knowledge and well-informed opinion on naval matters and a great many other things, and an inspirational teacher.  It was in this capacity that I first encountered him, as an MA student at the University of Hull in 2000.  He was a master of the unscripted lecture, drawing upon his vast knowledge to deliver focused but nevertheless broad-ranging lectures, whilst seminars in his office, where the shelves appeared in perpetual danger of collapse from the weight of books, were always thought-provoking and enjoyable affairs.

University lecturing was in a sense Eric’s second career.  After taking an MA in War Studies at King’s College London in 1971 he was appointed as a civilian lecturer at the Britannia Royal Naval College, Dartmouth.  He also taught at the United States Naval Academy in 1980-1.  After leaving Dartmouth as Deputy Head of Strategic Studies and International Affairs in 1984 he worked for the Council for Arms Control before becoming a freelance academic, in which capacity he worked with the Foundation for International Security, and also lectured at the Royal Naval College, Greenwich, and the University of Cambridge.  It was during this time that he wrote some of his most highly-rated works, such as Vanguard to Trident: British Naval Policy since World War II (1987) andThe Future of Sea Power (1990).

This period of Eric’s career came to an end with his appointment to the Department of Politics at the University of Hull, where he obtained his PhD by published work, and where he remained until 2005.  During this time he was involved with the development of the British Defence Doctrine, first published in 1996, and directed the University’s Centre for Security Studies.  In 2001 he acted as adviser to the expedition which rediscovered the wreck of HMS Hood and contributed to the resulting book and television programme, one of a great many television programmes which benefited from his expertise.

Leaving the University of Hull in 2005, the same year in which his excellent The Royal Navy since 1815: A New Short History came out, Eric moved to the University of Salford as Professor of Naval History and Director of the Centre for International Security and War Studies.  He moved again to Liverpool Hope University in 2013, from which he finally retired from teaching two years later.  Never one to sit still for long, however, he remained a prolific commentator and continued to publish on naval and strategic matters, as well as serving what turned out to be his final term as Councillor of the NRS.  He was also instrumental in the founding of Maritime History North.

Eric’s passing leaves a great void.  Naval history has lost one of its most respected practitioners and most colourful characters, and we have all lost a friend, a mentor and a generous source of advice and wisdom.  To his wife and family we extend our deepest sympathies.

Dr Martin Wilcox is a lecturer in history at the University of Hull. He is Director of the North of England Consortium for Arts and Humanities, a member of the Council of the Navy Records Society and Reviews Editor for the International Journal of Maritime History.