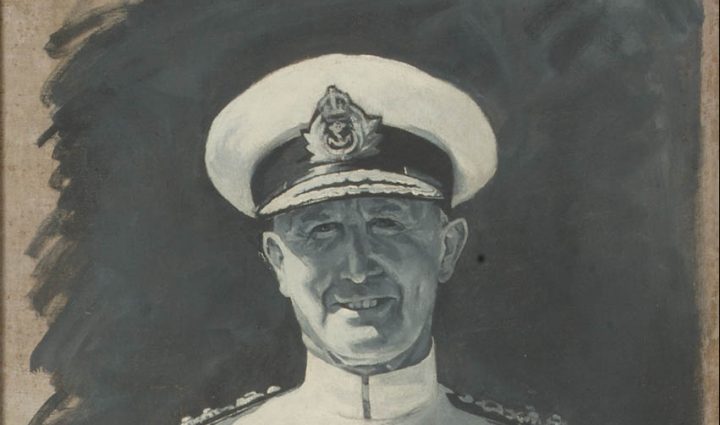 Two months ago the Chinese government banned the slogan, ‘Liberate Hong Hong.’ Memories of Hong Kong’s 30 August 1945 liberation, just three days before the Second World War was formally ended, are probably still very much in protestors’ minds. On that day Admiral Cecil Harcourt took a task force into Hong Kong to take the surrender of Japanese forces throughout China. His flagship was the cruiser HMS Swiftsure, and one of the naval officers on board Swiftsure wrote two letters to the First Sea Lord, Admiral Andrew Cunningham. The first includes the effects of war on mistreated prisoners of war in Hong Kong and one Chinese reprisal; the second describes the aftermath of the second atomic bomb on Nagasaki. Both serve as reminders to governments and people in these uncertain times of the dreadful consequences of the use and misuse of power.

How a lowly gunnery officer came to be writing to the First Sea Lord is a mystery. Lieutenant John Gerard Wells was the only son of Vice Admiral Sir Gerard Aylmer Wells, whose own ‘special service’ on HMS President in the First World War is also worthy of further investigation. His grandfather was Vice Admiral Richard Wells, Commander in Chief at the Nore, who had seen service in the Crimean War on the Arrogant. With such a background, perhaps it is not wholly unexpected that such a junior officer would feel emboldened to communicate directly with the head of the Royal Navy!

From Lieutenant J. Wells to Admiral Andrew Browne Cunningham:HMS Swiftsure,
[Hong Kong],
n.d., September 1945…On the forenoon of 30 August Admiral Harcourt decided to go in. He came aboard Swiftsure at 1100 and with everyone at Action Stations we went through the Lie Mun Pass at 1145. Batteries on the heights of the many small islands could be discerned quite easily. Apart from a few meaningless flags at local signal stations, our entry was uneventful. We were astern of D27 in Kempenfelt and had scores of fighters overhead that seemed cross at finding no opposition. Euryalus followed us in and we both anchored off a badly battered dockyard at 1230, to disgorge about 500 Seamen and Marines. They went ashore with our Commander in charge. Leading a troop of bloodthirsty Royal Marines armed to the proverbial teeth, he was greeted on the jetty by the resourceful Commander Craven (PoW) and a benign Japanese officer, hissing gently, and the last British Governor’s ADC (PoW) called MacGregor. By sunset the yard was completely occupied and aboard we felt reasonably secure…I spent the next two hours talking to a bunch of ex-PoWs who had just come out of a camp on the mainland called Shan Shio Po. Pretty groggy on their feet, rather haggard to look at, they were eager for news out of England more than anything else. They had never heard of Radar, V2s, Buzzbombs or jet propulsion and I had to explain them all very slowly indeed…One morning a small patrol became involved in a shindy near the Queen’s Pier where the Chinese had caught the Japanese High Executioner in disguise, trying to escape to Kowloon. They couldn’t prevent his quick and unpleasant death but they managed to get his body carted away in record time by two rick-shaw boys. It was a horrid sight, but could not have been worse than Cenotaph steps where the Japanese carried out daily executions.
From Lieutenant J. Wells to Admiral Andrew Browne Cunningham:HMS Swiftsure,
[Japan],
n.d., October 1945… I was appointed British Naval Representative, Yokohama, and Officer of the Guard at the Consulate…The Japanese seem particularly unresentful at the Allied occupation. They go about looking rather dejected but their labour gangs work well and they always appear keen to help one out…Tokyo has several large buildings still standing but the effect of incendiary bombs has been devastating…Arriving at Nagasaki at 0900 on 18 [October] . . . Imagine an area as big as Portsmouth and Southsea looking like a big mass of dirty rubble. Not a building stood upright within an area of a mile radius of the bomb burst at a height of 1400 feet. That one missile, the size of a melon, could do incalculable harm, was a staggering thought. Charred heaps of bones marked the areas of massed housing; here and there the blackened and blasted stumps of trees remained as if to signify the terrific heat that was generated. I picked up two bottles that had been melted together and one of the sailors found a stone impaled in a piece of metal. After half an hour I was glad to leave such a sickening yet terribly impressive spectacle.

Paul Harrison has taught at a Blackpool primary school for 34 years, and has always had a passion for history, especially naval aviation. He is due to start a PhD with Lancaster University to further his research into the Fairey Barracuda, a three-seat carrier-borne torpedo and dive bomber which saw extensive service with the Fleet Air Arm during the Second World War.