My Delight in Dillon’s Narrative – Part 1 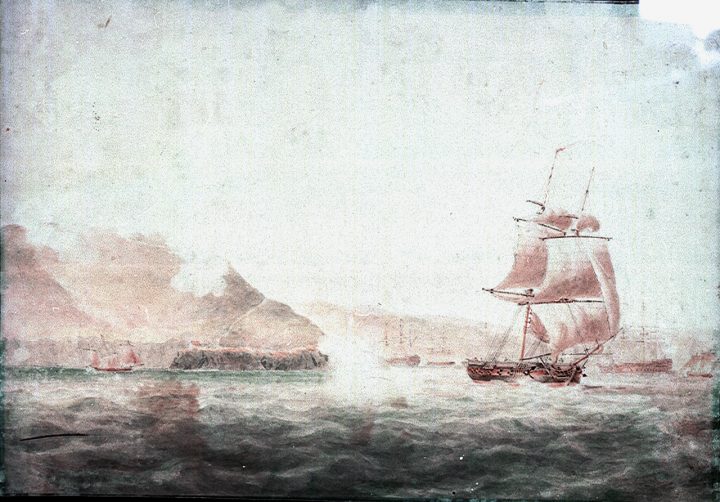 British naval history during the Age of Sail has had me in its unrelenting grip from a very young age ; by the time I was sixteen years old I had exhausted most of the books on the subject in my local library. My favorite naval author of all was Michael Lewis, who was professor of history at the Royal Naval College, Greenwich. Among other publications, his A Social History of the Navy 1793-1815 (Allen & Unwin, 1960) completely enthralled me, and I read it at least three times as a schoolgirl. How I yearned to find something else to read that would open up the world of the old sailing Navy in so delightful a way!

I came across such a book (or, rather, books) some years later, while browsing in a university library with neither Lewis nor matters nautical on my mind. I found myself staring at several shelves’ worth of stately volumes bearing the imprint of an organisation of which I had never before heard, the Navy Records Society. But what, on initial discovery, was I to borrow and devour first? That dilemma was solved by the fact that tow of the volumes were edited by none other than my much-admired Michael Lewis: Sir William Dillon’s Narrative of my Professional Adventures, 1790-1839, Volume I, 1790-1802 and Volume II, 1802-1839 – NRS vol. 93 (1953) and vol. 97 (1956) respectively.

The sudden and unexpected nature of Dillon’s incarceration in 1803 provides an interesting comparison to the experiences of those of us who found ourselves unexpectedly isolated for a seemingly endless period during the recent lock-down. Having left his ship under a flag of truce with only ‘something like a sandwich, and a volume of Shakespeare’s play’ in his possession, Dillon only expected to be away from his ship for a mere four hours. Little did he know that he would not experience freedom for another four years! In this extract the dramatic circumstances of his arrest unfold, and the indignation and utter disbelief of someone used to life’s many liberties, all suddenly removed, reads clearly within the narrative; understandably so given that the act was committed under a flag of truce!

I was finally taken to the Dutch schooner, Lieut. De Mann, where I was kept in a sort of confinement. The weather was oppressively hot, and, to prevent my seeing anything, the Dutch officer spread canvas curtains all round his vessel, which increased the heat by preventing the circulation of air. I was, I confess, much vexed at this detention, and, not having any change of linen, I suffered bodily comfort. The officer under whose charge I was placed was a portly person. Having served some time in the West Indies, he appeared desirous of soothing the annoyance I could not help expressing at what appeared to me a useless delay, as the answer to my despatch might easily be sent to the English Commodore by one of their own boats. I passed a very unpleasant night. My boat and crew had been sent in some other direction quite unknown to me.

After eight days passed in the most uncomfortable confinement, its termination appeared at hand. About 3 o’clock on the afternoon of the 28th, I saw my boat being towed towards the schooner, and it soon came alongside. Next my crew was brought. There was also a small galliot in motion, which was anchored close to us. Shortly afterwards a Dutch officer cam e on board and delivered to me the answer to my despatch, telling me that I was at liberty to return to my ship. So soon as my men had stepped the masts in my boat and were ready for making sail, I took leave of the lieutenant under whom I had been placed, and, stepping into it, ordered the bowman to shove off. But somehow or other, whether by intention or not I had not time to inquire, the painter was still fast on board the schooner. As he could not loosen it, I rushed forward and, drawing my sabre, which was a very sharp one, was in the act of cutting it when I was boarded by a large French launch full of armed me, the officer of which ordered me to lower my sail and surrender. When he saw me hesitate, he ordered his crew, some of them soldiers, to point their muskets at me; then said he should fire if I attempted any resistance. Under such circumstances, my seamen not being armed, and seeing no chance of getting away, I was obliged to yield. I was then handed into his boat and conveyed on board the galliot already mentioned where the Flag of Truce was hoisted, the French officer acquainting me that I was to remain on board of her until further orders. I found that there were no provisions in this vessel, or any accommodation suitable to myself and crew. I remonstrated upon the impropriety of such proceeding towards an helpless officer: that I had no money nor wearing apparel, and that to be placed in such a position was totally at variance with the usage of civilised nations. The officer at length returned to his Commodore, and delivered to him the objections I had made of being kept on board of the galliot.

Here then I was, detained in the most uncomfortable position imaginable. When I quitted the Africaine I had left all the property in my cabin unlocked, a gold watch and chain hanging up, a portable library, loose cash in my drawers which were not secure, all at the mercy of my servant. When I returned to England no watch was to be found, or the cash; and a considerable quantity of things were missing. That loss, never being recovered, must, I should think, give me some claim upon my country. But more serious losses were to befall me afterwards.

Dr Hilary L. Rubinstein authored Trafalgar Captain: Durham of the Defiance, published by Tempus in 2005.  Her investigation into the sinking of the Royal George at Spithead in 1782 will be published by Seaforth in 2020.