Submarines in the Mediterranean, 1941 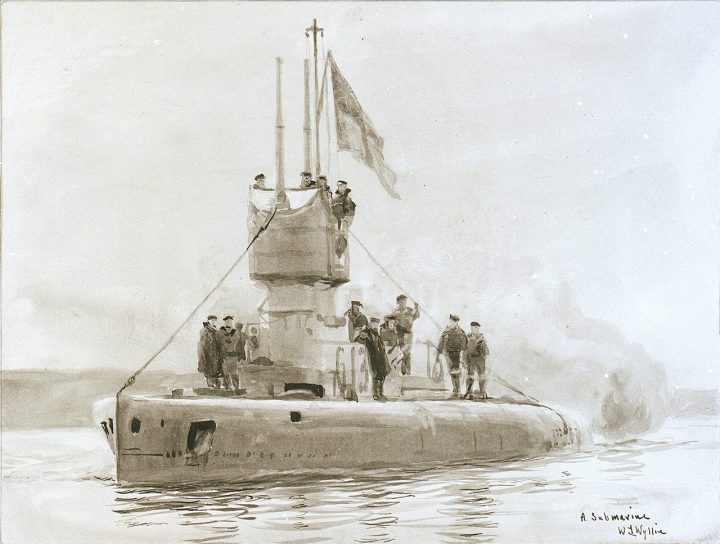 Understandably, as British sea power rested upon the superiority of its surface ships, there was a tendency in Britain to regard the submarine as being of secondary importance. Naval staff who read Julian Corbett’s influential 1911 ‘Some Principles of Maritime Strategy’ would find but a few pages on the need for more distant blockades, or the possibility of minor counter-attack from submarines.[1]

After Germany’s unrestricted submarine warfare of 1917, however, there was a greater understanding at least of how other nations might use their underwater forces. Admiral Herbert Richmond, writing in 1934 whilst Professor of Imperial and Naval History at the University of Cambridge, considered submarines of little use defensively, but their ability to attack heavily defended shipping made them of great importance to Japan, France, Germany and ‘the lesser Powers.’ Contrary to the belief of those who wished for arms reductions by treaty, their adoption by these navies actually increased the size of battleships and their defensive flotillas in other countries.[2] This, in turn, strengthened the persistent belief that the submarine service was a helpful, but not essential, part of the Royal Navy. Operations in the Mediterranean in 1941, however, were to show how wrong this was.

Following its severe mauling at the fall of Crete and Greece, the survivors of Admiral Cunningham’s forces were forced back to Alexandria. From this remote south-eastern corner of the Mediterranean, with enemy air forces now operating from Crete and Cyrenaica, the supply of Malta and Tobruk by sea became extremely hazardous, and the enemy were now able to sustain their North African armies via Benghazi, as well as Tripoli. In addition, the Aegean opened up as a route for Rumanian oil.

With the enforced inaction of the Royal Navy’s surface fleet, however, the submarine service came into its own. Cunningham soon found that both the small U-class (10th Submarine Flotilla) working from Malta and larger T-class, based in Alexandria were finding so many targets that he felt it necessary to ask the Admiralty to send him all the submarines that could be spared.[3] Between June and September no Italian merchant ships were lost to Allied surface ships, but 43, totalling 129,937 tons were sunk by British submarines. In addition, one German ship of 1,829 tons was sunk.[4] Submarines were also employed in the safe delivery of essential supplies to Malta.

Submarines:  Upholder returned from patrol off Marittimo and reported: (a) Sinking a 2,000-ton eastbound merchant ship … at 0920/20. (b) At 1633/22 scored two hits on a [depot ship Lussino] in a westbound convoy … (c) At 1034/24 attacked the force already reported of 3 cruisers and destroyers … One torpedo hit and … one of the escorts had been torpedoed. The C-in-C made the following signal to Upholder: “Congratulations on a further successful patrol. Your work is excellent.”

Submarines:  During the month of August, submarines inflicted the following damage on the enemy: Sunk – 9 ships totalling 17,252 tons for certain and one schooner probably also. Damaged – one 8-in cruiser, one 6-in cruiser and one destroyer probably damaged. Four ships totalling 18,957 tons… In addition, 68 passengers and 120,000 gallons of white oils, 12 ½ tons of stores, 359 bags of mail and certain other items were transported from Alexandria to Malta by the three submarines working on transport duty.

Interruption of Enemy Communications with Libya

I know that you realise the vital importance of this as much as we do. I am sending you every available submarine; in fact, except for the ‘S’ class, which are not considered to be very suitable for the Mediterranean, and two ‘T’ class, which are operating from Murmansk, you either have or will have every available submarine. I only hope your Captain SI will not treat them too rough.

I know we are being treated very generously as regards submarines. Every one is worth its weight in gold and they are doing fine work. I hear, however, that the Malta ones are feeling the strain a bit. Two have been heavily depth charged and damaged and, of course, they have lost five out of 12. I can’t help thinking P32 and P33 blundered into a minefield. Perhaps lately laid. The time of flat calms and clear skies round Malta is drawing to a close so they may have an easier time.

I do not think surface forces from Malta would achieve anything in an attempt to stop supplies coming from Italy down the Greek coast to Benghazi. In fact, far as they would be from fighter support, I think they might have heavy losses by air attack even if the Italians didn’t send a large force to cut them off. You see retreat to the Eastward would be highly risky.

Unbeaten, Upholder, Ursula and Upright were disposed on 17 September NE of Tripoli to intercept a convoy of liners reported by reconnaissance. Unbeaten sighted the convoy at 0317/18 and reported it. Upholder and Upright closed the convoy and Upholder attacked scoring one hit on each of two liners, which were both then seen to be damaged and one stopped. Upholder later closed and sank the damaged liner. Ursula then attacked the convoy and hit another liner, identified as Vulcania which continued into Tripoli at reduced speed and appeared to have been damaged. It was later established that the two liners Oceania and Neptunia were both sunk in this attack and Vulcania avoided Ursula’s torpedoes.

The C-in-C Congratulated the 10SF on such a fine piece of team work.

Paul Harrison has taught at a Blackpool primary school for 36 years, and has always had a passion for history, especially Naval Aviation. He is studying for a PhD with Lancaster University to further his research into the Fairey Barracuda, a three-seat carrier-borne torpedo and dive bomber which saw extensive service with the Fleet Air Arm during the Second World War.