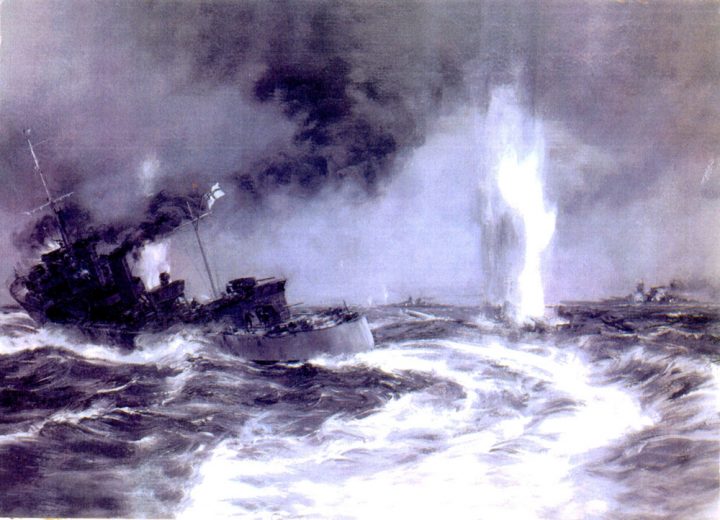 My father, Colin Donald, joined HMS Venomous in 1926, for his first full sea appointment. She was one of the V and W Class, built in the final years of the First World War, to serve with the Grand Fleet.  He went on to serve in two other ships of the Class, HMS Versatile in the early 1930s, and HMS Vimy at the beginning of World War Two. It is therefore appropriate that I am now acting as a researcher and adviser for the website of the V and W Destroyer Association, which records the histories of the ships and their people, and serves as a forum for the veterans and their families. My father also left a fine collection of Navy Records Society publications, to which I have added.

On 12  February we are commemorating the 80th Anniversary of the ‘Channel Dash’, and the attack on the German Battle Cruisers Scharnhorst and the Gneisenau, and the Heavy Cruiser Prinz Eugen, by the V and W Class destroyers of the 21st and 16th Destroyer Flotillas, HMS Campbell, Vivacious and Worcester, and Mackay, Walpole and Whitshed, commanded by Captain Mark Pizey.

At the end of 1941 the German ships were gathered at Brest, threatening the Atlantic convoys. Fortunately they were within range of Bomber Command, and were subjected to continual air raids, which failed to sink them, but prevented them from putting to sea. The Admiralty believed that Hitler would move the ships back to Germany for refit, and then send them to Norway. They made plans to intercept them, under the name Operation Fuller. The German High Command came to the same conclusion and decided that the best route for the ships would be the most direct one through the English Channel, and made plans for Operation Cerberus. The thinking of one Command was mirrored by the other – both selected the same route and same period for the operation. The only difference was the time of day that the ships would pass through the Straits of Dover.

The Admiralty saw this as a golden opportunity to remove the threat posed by the German battle fleet and issued orders which should see that the German ships were detected as soon as they moved, and attacked by M.T.Bs and torpedo carrying aircraft, bombed, shelled by the big guns at Dover, mined at intervals on passage, and if anything was left, torpedoed by destroyers east of Dover.

The German High Command also issued its orders, the route was swept by minesweepers piecemeal to conceal the planned route, destroyers and E-Boats gathered at ports along the route, and the Luftwaffe moved aircraft to suitable bases. Everything was set for 12 February 1942.

The big ships prepared to move at dusk, but were delayed by an air raid and finally set off at 2200 accompanied by six destroyers, with five more to join off Le Havre, a further five at Dunkirk, five more at Flushing, with three flotillas of E-Boats, forming a considerable force guarded by night fighters. A British submarine had been patrolling the Brest approaches, but had withdrawn to charge batteries. Three Coastal Command aircraft on patrol had suffered malfunctions and returned to base.

By 0800 the following morning, 12 February, the German ships had steamed 250 miles, with 40 miles to go to the Straits of Dover. The night fighters were relieved by ME109s. The Admiralty thought that the big ships were still at Brest. Spitfires on morning coastal patrol spotted some E-Boats leaving Boulogne, but the pilots were observing radio silence, and had not been briefed on the imminent breakout of German forces.

The radar station at Swingate, near Dover, detected three big blips at about 1000, and connected them with Operation Fuller, but the telephone line to Dover Castle was defective, and the Naval authorities did not receive the information until 1040. Two spitfires on patrol ran into the ME109s and overflew the big ships, but again did not break radio silence. The weather worsened as the day wore on, there was low cloud, rain and poor visibility. By noon the armada was off Cap Gris Nez, and about to enter the narrowest part of the Straits. The heavy guns ashore fired a few rounds to no effect. M.T.Bs from Dover attacked at 1235, but no hits were scored.

At 1130 six Swordfish torpedo aircraft of 825 Squadron, commanded by Lt Cdr E K Esmonde RN, were ordered to stand by for an attack at about 1245. A later attack, coordinated with RAF Beaufort torpedo bombers, was considered, but it was decided that the slow, 80 knot speed of the Swordfish meant that no delay could be accepted. For the same reason only one of the planned escort of five fighter squadrons arrived in time to provide a close escort, though two arrived later. It was difficult for 250 knot Spitfires to escort the 80 knot Swordfish, and their wing top camouflage and the poor visibility made it hard for the fighters to find them if they lost contact. Lt Cdr Esmonde was shot down before completing his attack, but at least two Swordfish, and probably the other three dropped their torpedoes before crashing.

At 1156 the combined force of V and W destroyers were at sea off Harwich when Captain Pizey received a signal that the enemy were passing Boulogne, and the destroyers set off to intercept. A further signal reported that the enemy’s speed had increased, so that the only way of catching them was to cross the British minefield, which they did without damage. Walpole’s engines broke down but the other five pressed on at 28 kts, being bombed by Luftwaffe and RAF alike.

They were formed in two divisions, with Campbell, Vivacious and Worcester to attack Gneisenau, and Mackay and Whitshed destined for Prinz Eugen. Scharnhorst had struck a mine and dropped behind. The weather had deteriorated still further, there was a choppy sea and it was snowing when at 1517 Campbell’s radar showed two large blips at 9 miles. Gun flashes were seen and as they closed the range they were fired on by the battle cruiser’s main armament, and attacked by aircraft with guns and torpedoes.

At 3300 yards a shell burst under Campbell, and Captain Pizey decided to fire, and Vivacious followed suit. Worcester closed to 2200 yards before firing, and was hit repeatedly by the Germans, totalling six 11 inch and 8 inch shells, with considerable damage and loss of life.

After standing by Worcester, Campbell and Vivacious returned to Harwich to refuel and re-ammunition. Worcester was eventually able to restore power, and returned to Harwich independently. The German Battle Fleet steamed on their way. Scharnhorst hit another mine, as did Gneisenau, but they all arrived in home ports on Friday 13 February.

The Navy Records Society has published a number of interesting sources relating to this operation including the report by the Board of Enquiry of 2 March 1942 which investigated 825 Squadron’s attack. It is held in the National Archives at ADM 116/4528

“Passage of the Scharnhorst. Gneisenau and Prinz Eugen through the English Channel,Number 11 in the Battle Summaries series of Naval Staff History – Second World War (1943), The Bucknill Report produced as a result of a government enquiry after the Channel Dash (ADM 234/328), Plan 1: Position of attack by British Naval Forces (ADM 186/803)” 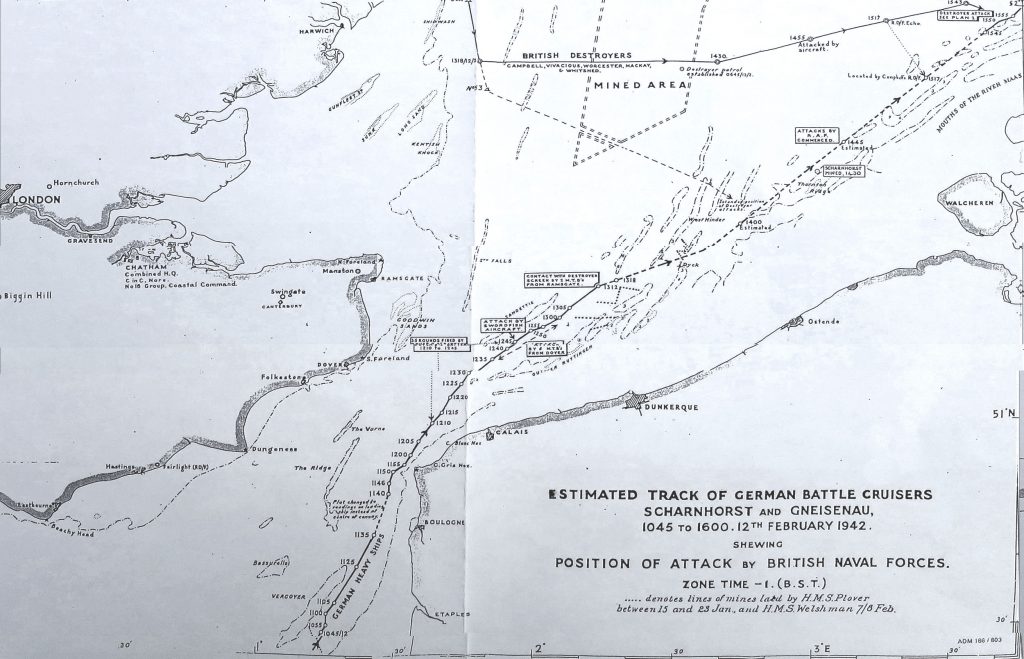 Frank was born in March 1940, son of Lt Cdr Colin Donald RN (b  Stirling 1904) and Kyriena Nikolayevna Andreyeva (b St Petersburg 1908). His parents met in 1931 when Versatile visited Riga, and married in December 1936. His father was killed in May 1940, while in command of HMS Vimy during the Boulogne evacuation. Frank served in the Royal Navy from 1958-1990, serving in both submarines and surface ships. In addition to current involvement with the V and W Destroyer Association Frank has been singing with the Edinburgh Royal Choral Union since 1991, and previously the London Philharmonic Choir and the Edinburgh Festival Chorus.