The Men of HMS Temeraire at Trafalgar 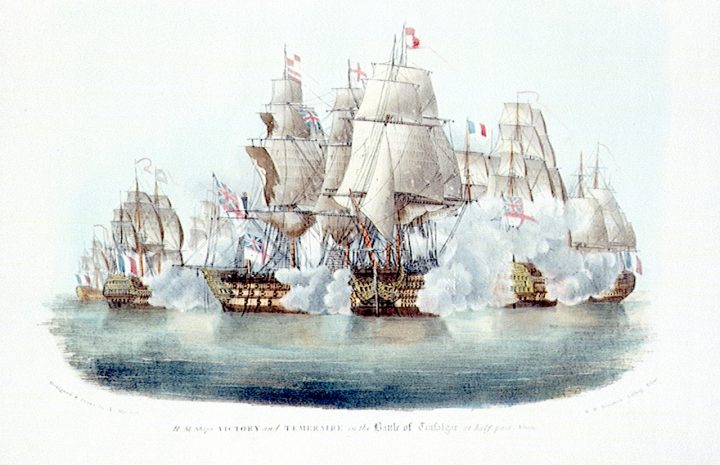 This article provides a small breadcrumb of research in support of a wider project relating to the lives of the men aboard HMS Temeraire during the Battle of Trafalgar. Within the text, the eyewitness mentions the sinking of the French ship Redoubtable following a storm, with the latter having been towed by Swiftsure. The extract below also mentions the presence aboard Redoubtable of a prize crew comprising men from Temeraire. Having consulted the Swiftsure’s October 1805 muster book to see just how many men from the Temeraire they had rescued after the storm, further information was found in a section called ‘Supernumeraries for Victuals’. A total of 29 men from the Temeraire are listed, including Lieutenant Wallace, Midshipmen Allen and Davis, 21 seamen, 4 marines and a 2nd class boy. There is also 3 from the Phoebe and 1 from the Victory. Further studies have also found the Temeraire men on the Phoebe, Orion, Neptune and Euryalus. After the battle a total of 74 Temeraire men were on board other ships. Of note, there is also a section in the Swiftsure muster called ‘Prisoners at 2/3 Allowance’ which lists 403 names. These range from No.1, who is a certain ‘Lucas’ received on the 21st October from Le Redoutable, to No. 403, Richard Molinos from Le Achille. It would appear that many of these prisoners were sent to Cadiz after the battle, presumably as part of a prisoner exchange.

At 7 P.M. sent a Masters Mate and 16 men, with a Lieutenant and party of marines on board the Berwick to assist in securing her and getting her into port, the Berwick being a French prize. At 9 P.M. the prize master of the Redoutable hailed us, and requested us to give him some assistance as the prize was in a most wretched situation as they were scarcely able to keep the ship above water though they employed all hands (prisoners not excepted) at the pumps. We immediately sent a hawser on board and took the ship in tow, at the same time sending a Lieut. and a party of seamen to assist the prize master. It was impossible to ascertain yet how many ships had struck to the British flag the fleets were so much scattered, and it so soon became dark after the action.

On the 22 it came on to blow a most violent gale of wind, but the prize in tow seem to weather it tolerably well, notwithstanding her shattered state, till about 3 in the afternoon, when from the violence of her rolling in a heavy sea, she carried away the foremast the only mast she had standing. Towards the evening she repeatedly made signals of distress to us, we now hoisted out our boats and sent them on board to save if possible the people on board of her, although there was a tremendous sea running and we were fearful lest the boats would be swamped alongside the prize, but they happily succeeded in bringing off the greater part of them from the wreck as well as our own Lieutenant and part of the seamen we sent on board, with the Lieutenant and two Midshipmen with some seamen all belonging to the Temeraire.

If our situation was disagreeable from fatigue and inclemency of the weather, what must not the unfortunate prisoners have suffered on board the Redoutable. Previous to the action she had on board upwards of 800 men, nearly 500 were killed or wounded in action, and many of the surviving 300 perished. What added to the horrors of the night was the inability of our saving them all, as we could no longer entrust the lives of our men in open boats at the mercy of a heavy sea, and most violent gale of wind. At 10 pm the Redoutable went down, and the hawser by which we still kept her in tow (in order if the weather moderated and the prize be able to weather the night through, we might once more endeavour to save the remainder of the crew) was carried away with the violence of the shock.

Emma Cooper studied Furniture Design at the London College of Furniture, and has spent the last 20 years making historical furniture for museums and historic houses. For the past 25 years she has been researching the lives of the men who served aboard HMS Temeraire at the Battle of Trafalgar. Emma lives in Lincolnshire with her husband and daughter.