The Naval Brigade in China, June 1900 – The Robley Browne Diaries 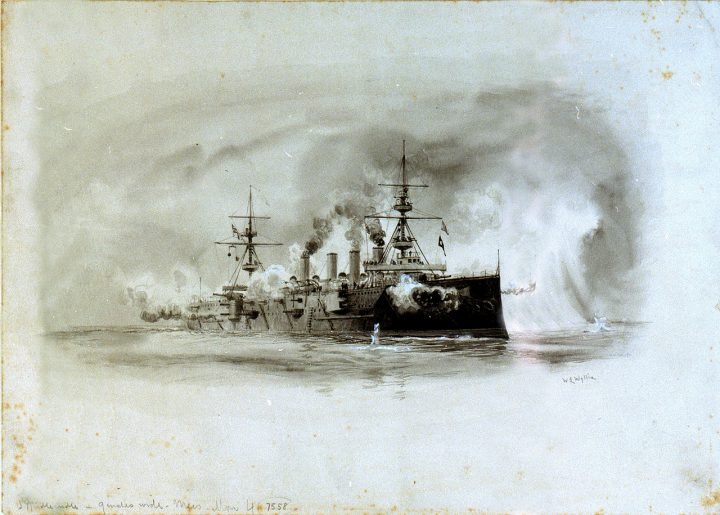 Seeing the photograph of Alacrity’s Surgeon Lieutenant Robley Browne, I recalled my father’s volumes of Navy & Army Illustrated – a pictorial record of the Empire’s armed forces during the Boer War and Boxer Rebellion. I absorbed keenly the photographs and tales of ‘soldiers and sailors of the Queen’ – particularly the RN Brigades.  This Robley Browne image accompanying his diary is redolent of that period as he displays the confidence of an RN officer in the service of the Queen. He records his presence with the international force relieving the Taku forts from Chinese nationalists, known as ‘Boxers’, in June 1900. This first-hand account of the fighting, and the bravery of the members of the Naval Brigade, is provided by Browne along with vivid personal reflections and humour. An extract of the fight for the Taku forts is included below.

The Boxer Rebellion was a fascinating moment in naval history, with some of the characters involved, including Robley Browne, seeing action in the Great War, most famously the successive Admirals of the Grand Fleet, Jellicoe and Beatty. Perhaps lesser known was Christopher Cradock, who commanded Browne’s landing party at Taku forts and infamously flew his flag on the ill-fated Good Hope during the Battle of Coronel in 1914.

We commenced to advance over the intervening 1500 yards. Ground was composed of dried mud & almost entirely free from cover. I only had 2 stretchers, one I sent over to L. with the Marines, the other I left to follow Rt. company & I kept in centre of advance. My first patient was a Russian shot through the throat – quite a hopeless case! Fortunately our casualties were very slight. Assault on fort was very picturesque; moat had to be crossed by small bridge leading to gateway & enemy kindly left bridge intact! We had several explosives parties, but gate yielded to pressure. Firing line did not meet with any great resistance. Our flag was up first, closely followed by Japanese. All the other forts were still busily engaged. A lot of stuff aimed at [our gunboats] was flying over ground over which some of us were still advancing!Directly our people had cleared enemy out of NW fort, guns were turned on to outer (N) [fort]. Guns of this fort were in turn used against fort on S. side. At this moment enemy decided to ‘git’ & in the distance we saw a column of men clearing out of a fort, with some officers on ponies. They received a few parting shots to accelerate their departure. There was some desultory firing for ½ an hour or so, but the show was over.It was now 7am on a glorious Sunday morning, but it seemed more like noon – if not later. I had to retrace the whole of the ground we had come over to collect any wounded. Our Naval Brigade only lost 1 killed & 6 wounded; of course, there were some casualties among the foreigners, including several officers.

Geoff Cunnington is a retired company secretary with a life-long interest in naval history. He has assembled a comprehensive collection of naval themed postcards and photographs focussing principally on the Royal Navy from late Victorian times through to the First World War and the wider Dreadnought era. Geoff has recently contributed images to the Vanguard Crew Photos project and is currently researching photographs of naval personnel identified through postcards.