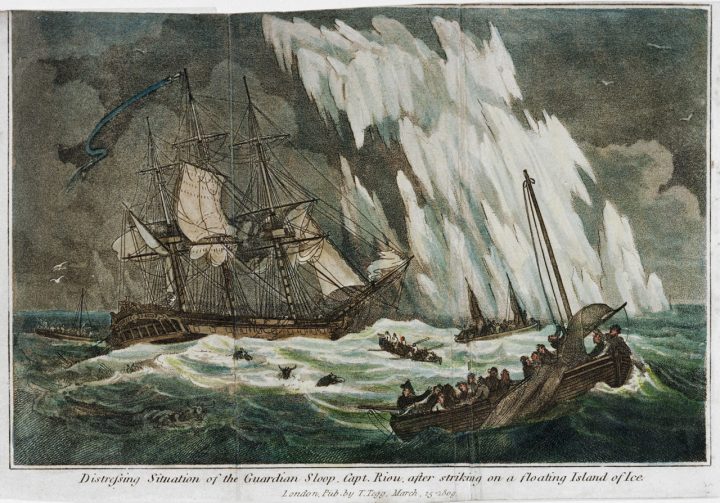 Many people in Britain have faced the bitter cold of winter this month, as freezing temperatures and extreme weather conditions have swept the country. The history of the Royal Navy is rich with examples of ships encountering similarly challenging conditions at sea, where nature’s elements can hold as much danger as any enemy forces. Delve into the NRS archives, and you are bound to find examples of sailors battling with freezing temperatures and icy seas…and occasionally not faring too well!

Few stories are as poignant in this respect as that of the Guardian. In the late months of 1789 she was transporting provisions from the Cape colonies in Southern Africa to the newly-founded settlements in the Australian continent. The following extract originates from the journal of the captain, Edward Riou, and describes the moment when ‘a body of ice full twice as high as our masthead’ is sighted through thick fog – dangerously close to the ship!

The account is worth reading in its entirety. This ordeal, documented with precise detail, provides several prime examples of leadership, resourcefulness, and the desperation of those faced with mortal danger and adversity.

The instant danger which threatened us caused such dreadful expressions of despair from a few around me, that at once served as a warning to me to collect myself and to show as much as was within my power an example of fortitude. The ship answered her helm in coming up to the wind. I stood waiting the consequences of this dreadful situation, nothing more being left for me to do. The ship at this time seemed to be entering a cavern which was large enough to receive her entirely. My eyes were fixed on the jib boom, judging from the distance that I should every instant see it feel the first effects of our approaching dissolution. In this situation I remained perhaps a minute, when the expected shock came; which, though it shook the whole frame of the ship, was so unexpectedly favourable (as I had entertained little hope of the ship surviving the first instant she touched) that I immediately ordered the afteryards to be braced about, the ship having by this time so much come round that the wind was then rather on what had been before the lee bow, and still continuing to come round on her keel. I perceived that at this instant we were at the weathermost extremity of the ice, the’wind blowing fresh round a projected precipice, which acted upon the headsails which were aback and enabled her to tack completely. The headsails now were braced about, and the ship’s head off from the ice and so much round that the wind was now abaft the beam. An impending mountain [was] hanging over the mizen topmast head threatening to fall—we had observed in coming down to the island that a constant fall took place.

I now feared that, as the sails on the main mast and mizen mast were becalmed under the lee of the ice and that the head sails were receiving a fresh of wind which blew round the weathermost precipice before mentioned, the ship would fall off broadside to the ice and bury herself in the dreadful cavern which was upon the larboard quarter: to avoid which nothing was in my power but to keep the head sheets well off and to put the helm amidships ready to act in whatever direction should be necessary whenever the ship gathered way. This I ordered to be done, but the man at the wheel could not move it, by which I was sure that the ship still hung on the ice. In this anxious state nothing more was done than hoisting the middle and top gallant staysails.

This dreadful situation of suspense lasted about 5 or 6 minutes. I ordered the pumps to be rigged and waited at the binnacle to seize any advantage which might offer for a change of circumstances; when I felt the ship receive a sudden shock and immediately begin to move through the water. I now ordered the helm amidships, but at the same instant the quartermaster found the tiller ropes broken and I was informed by a person from the wardroom that the rudder was torn quite away: on which I replied, ‘Oh we will soon make a new rudder.’ I immediately ordered everyone to the pumps and they all set to work.

Neil Jackson is a serving warrant officer in the Royal Navy, currently assigned to HMS Queen Elizabeth. He has a BA(Hons) in History from the Open University, and is the Editor of the Members’ Blog.