The Quarantining of HMS Diamond in Tasmania, 1886 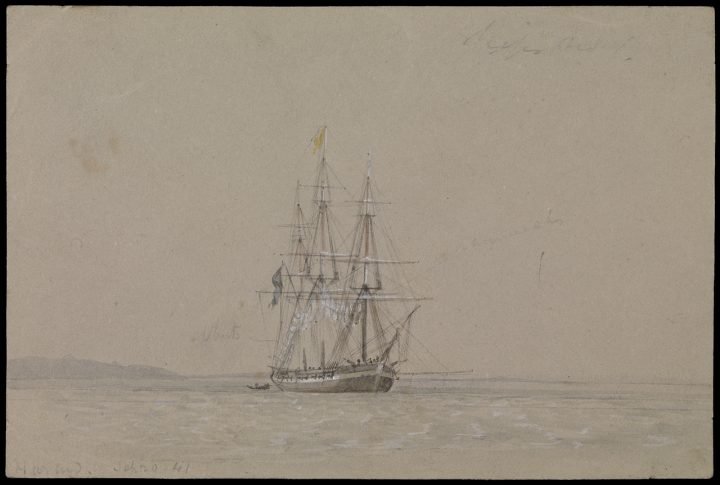 Captain Francis Starkie Clayton started his career as a Naval Cadet, and by the time of his death in 1904 had risen to the rank of Admiral on the retired list.  These letters were written to his second wife Edith whilst he was in command of HMS Diamond on the Australia Station in 1885-8. The abstracts below, from a small section covering March to April 1886, describe the spread of an unidentified infection and treatment of the ship in quarantine by the officials in Hobart. Typhoid Fever is a highly contagious bacterial infection. It had a very high fatality rate, with knowledge of medicines limited, and antibiotics being unheard of, at the time. While Captain Clayton complains against the treatment and subsequent quarantining of his ship, the behaviour of the officials ashore is understandable at a time when typhoid was one of the biggest killers in any community.

5 March 1886 – at sea… [I]n the evening we drilled of course, but I had to make it mild as we have a great number of men sick  – a curious sort of very mild fever, what in England would probably be called a feverish cold. We have 20 men down with it and it puzzles the doctor as the symptoms are various and we cannot attribute it to any particular cause. We were rather anxious (I was, at all events) about typhoid fever in Cockatoo Dock. We took all sorts of precautions and I think if we had not done so these cases would very likely have turned into that horrid typhoid which is very prevalent in Sydney where drainage and water supply are alike bad.

I hope we may get in [to Hobart] after all today, before dark … I made sail and we came up finely, arriving about six thirty. Then came a lot of vexations; they won’t give us pratique, owing I think to a very stupid health officer. However, here we are with the yellow flag flying, at all events till the council meet this morning. I know they have typhoid on shore and it is simply ridiculous their going on in this absurd way. Our doctor was angry and I was afraid he was going to have a row with the man. I was only amused at the absurdity but it was annoying. They would not even take my telegram for the Admiral but I had to shout it out to the people in the boat. It is simply childish … The Premier is a doctor; I hope he will have a little common sense. Can’t write any more now. They have put us in quarantine and we have to go about 14 miles down. A lot of cowardly creatures; there must be as much chance of catching typhoid as of catching a broken leg.

We have had more than 30 sick. I feel very thankful that things are no worse … Have I described the Quarantine place? [I]t is a peninsula about 3/4 mile long, the ship lying off the end of it. The buildings are at the neck where it joins the mainland or rather the land of Bruni Island. They consist of two houses, one for day use, the other for night, for the people who are not sick … [T]he buildings are of corrugated iron and weather boarding and I am afraid rather chilly at night. However, I have landed some sails to help to keep them warm; then beyond these two houses is the hospital surrounded by a high close paling. We don’t use the hospital; Cross and a marine inhabit the cottage … If we could only get our food regularly it would be all right but up to present time, we have got nothing. They are very remiss at Hobart; I suppose having got us away they don’t care what happens. I will remember these gentlemen for all this.

Helen Mistry has spent most of her career in Medical Education. She is now undertaking an MA in Naval History with the University of Portsmouth.