The Royal Navy and the Panjdeh incident, 1885 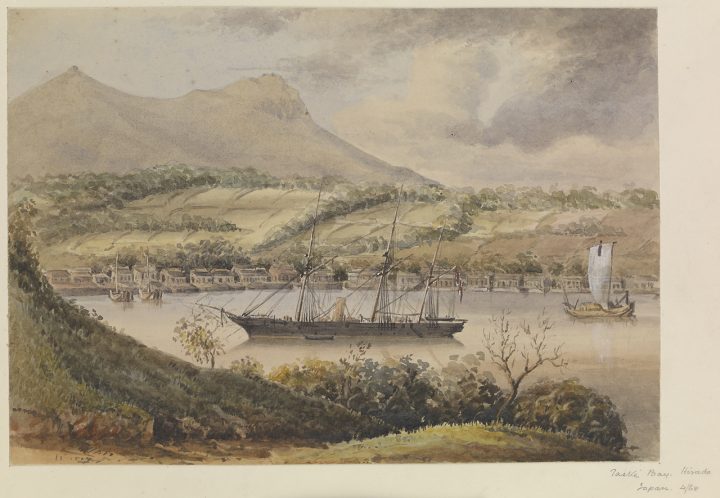 In 1865 the China Station was detached from the East Indies Station and had three bases; Singapore, Hong Kong and Wei Hai Wei. To support these bases, various coaling stations were established often for fairly limited periods. Yokohama was one example, but exactly how long it was a coaling station is unknown. It was included in an Admiralty return in 1882, however an update from another vessel in 1903 commented it had been out of use for some time.[1]

The coaling station at Port Hamilton is probably the shortest-lived coaling station the Royal Navy had. It existed for less than two years and was built to counter a Russian threat. The harbour which is between two islands off southern Korea was named in 1845 when it was first surveyed by then Commander Edward Belcher (later Admiral Sir Edward Belcher) of HMS Samarang, who also surveyed Hong Kong. The Russians eyed the harbour in 1857 and planned to establish a coaling station there but abandoned the plan. The United States Navy then proposed to do so in 1884, and was given permission by the Korean government, but did not take the next step.

During the early 1880’s Russia was trying to expand towards India, with Afghanistan as the border country. Although Russia and Britain had agreed to a Commission to settle where the northern Afghanistan border, Russia tried pushing further. As it had nearly completed its conquest of Turkestan it looked to move on, forcing various tribes into their sphere of influence. However, on 30 March 1885 the Russians reached so far that they forced a reaction from Britain, with what became known as the Panjdeh incident. This occurred when Russia conquered a Panjdeh fort at Ak Tepe, and the Panjdeh insisted they were part of the territories of the Amir of Kabul. The news reached Britain on 7 April and preparations for war began.

As part of the response to this in April 1885 three RN ships moved to Port Hamilton which also enabled them to provide a counterbalance to the new Russian naval base at Vladivostok. As well as introducing pheasants to the island the Navy also established a telegraph cable station and a coaling station. The Russian threat reduced and the base was demolished by the time the British left on 27 February 1887. Russia kept much of the territory it had seized until the 1921 Afghan-Soviet Treaty of Friendship, which was the first international agreement made by the Soviet Union. In this the Soviets agreed to return to Afghanistan the Panjdeh territories they had seized; however, this was never done. Port Hamilton is now known as Geomun-do, but the pheasant’s descendants remain there as a legacy of the Royal Navy’s presence along with a few naval graves.

The following account provides a lower-deck perspective of this historical events, recorded by a rating on the China Station gunboat HMS Linnet. However, as is noted in the editor’s introduction to this journal, these tumultuous events do not appear to make much of an impact upon the writer, who appears to be somewhat nonchalant about the potential for all out war with another European power!

… We carried out near about the same routine all the time we lay here which was until March 15th 1885.We received a telegram from the Admiral Sir William Dowell on Saturday 14th March to get ready for sea at an hour’s notice; on Sunday 15th another ‘Leave immediately – Woosung’. We had our fires lit and it was not long before we were off. We received the telegram at 6.50pm and was [sic] gone at 7.30pm. … We stopped long enough at ChinKiang Monday to send a tombstone for Fossey’s grave.

… Our sudden call was on account of the Russians with whom we were almost at war, in fact we did not know a minute that the news might arrive, we were all in good spirits and would have worked all night without grumbling just to have had a brush with them next day.

… Affairs are looking bad although it is pretty quiet. We have notice to come off if three guns are fired any time we are on shore. A gentleman said in Shanghai, to some of us that if we beat the Russians he would treat us to a champagne supper. (We wanted it at once.) We told him we could beat them easy enough after, or never return to get the Supper. He said he should have great pleasure to pay for two but he wanted to see the work done first. We saw him after the scare was over and claimed our reward on the ground that we frightened them so they would not fight. He gave us a bottle of champagne to drink his health and we did it.

Dr Mark “Dicky” Barton served for a full commission in the Royal Navy as a Marine Engineering Officer, retiring as a Commander after nearly 35 years. His early career focused on aircraft carriers and naval architecture, and he was involved in the design of the new aircraft carriers. He remains involved with naval architecture, particularly in the work of the Royal Institution of Naval Architects (RINA) where he is involved in the Professional Affairs Committee conducting academic accreditations.

Over the latter years, having become interested in the social history of objects, and having written various historical booklets, he went on to co-author a full book British Naval Swords and Swordsmanship. His PhD thesis looked at the Patriotic Fund at Lloyd’s in the Napoleonic Era. He also produced The Engineering Branch of the Royal Navy and Dockyards and Bases of the Royal Navy for the Royal Navy, as well as writing Fighting Instructions Maritime Engineering. He has published more than 30 articles in various journals.

Now retired from the Service and living in Portsmouth, he is pursuing a portfolio career in research and publishing, while continuing his work with RINA and the Methodist Church, in which he is a local preacher and sits on the Methodist Forces Board. He is a member of council for the Society of Nautical Research. Mark is always delighted to speak at events on his passions and discuss his work.