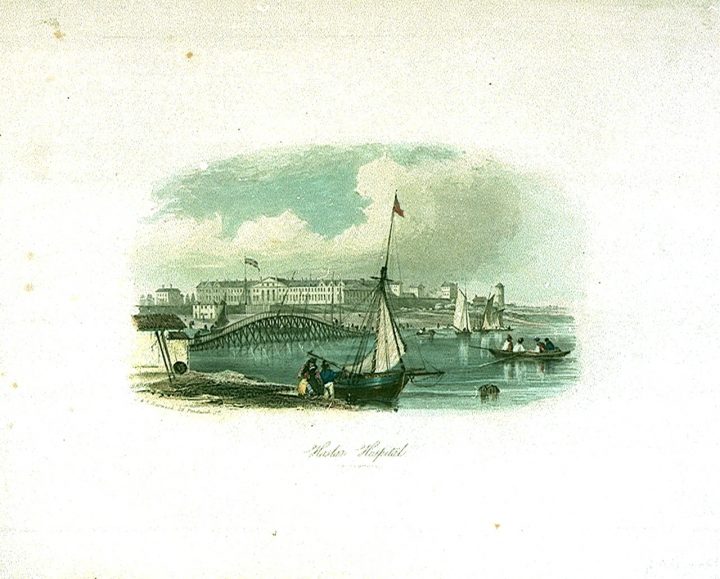 Dr. James Lind was an eminent figure of naval medicine in the mid-eighteenth century, initially joining the Royal Navy as a surgeon’s mate before rising to become the first Physician of Haslar Hospital.  This document is the second chapter of a larger work first published in 1757, which sought to address the issues that caused the spread of debilitating illnesses such as scurvy, yellow fever, and typhus (known as ship or jail fever) on British ships at the time.  The extracts below provided advice to prevent the spread of contagious diseases in the close confines of a fighting ship, where for obvious reasons precautions such as ‘social distancing’ were not really an option!  The preventative measures suggested here provide an interesting contrast to modern day government advice being shared to fight the current contagion threatening the health of each and every one of else today.

The place commonly allotted for the sick, is either the fore part of the Gun-Deck, called the Bay, which is the most damp and unwholesome part of a ship; or, what is nearly as bad, and very incommodious, the fore part of the Hold. Both these confined places have too often proved a seminary of infection to the whole company. If the nature of the service would permit, whenever the dysentery, or other infectious disease, especially a malignant and petechial, or what is called the Jail fever, are apprehended, the most proper place for the sick in warm weather, or in a hot climate, is under the Forecastle.The means, by which particular persons may best defend themselves against contagion, are next to be considered. A glass of the bark-bitter taken once or twice a day, will be found an excellent preservative against sickness and infection. Or the bark itself may be taken either in substance or in extract; it is now the principal medicine used by the Franks or Europeans in Turkey, as a preservative against the infection of the plague. And I recommend it to all nurses and attendants on the sick at land, for their proper security against infection. We often observe a fever to run through a whole family, and even the next neighbours to become infected by it; the precautions here directed, together with the bark, are the best preservatives I know.

The method of indiscriminately shutting up whole families in their houses, wherever a sick person is found, as is commonly practised in Europe during the rage of the plague, or any general infection, is attended with the most dangerous consequences. Solicitude at first to conceal the progress of the disease, and continual endeavours afterwards to fly from its attack, are the immediate consequences: the confined look upon themselves as thus doomed to certain death, and neither the strictest vigilance, nor severest punishments, can prevent their escape; which still further diffuses the infection. The very reverse method should on such occasions be put in practice, whereby self-interest may be led to strengthen every regulation that is enjoined. On the first alarm, families that are in health should immediately shut themselves up, and stop all communication with the infected; after which, an entire separation should be made between those who remain in health in the infected houses, and those who are sick, the dispersed sick should be carefully collected into one place, and the houses be purified on their removal; as others are taken ill, they should also be immediately put with the sick and, in a short time, the infection will be wholely confined to one spot.

Neil Jackson is a Warrant Officer in the Royal Navy, and has a BA(Hons) in History from the Open University. Specialising as an Aircraft Controller, he is currently serving in an air operations management role on HMS Queen Elizabeth.