The Rum Ration – By Order of Old Grog! 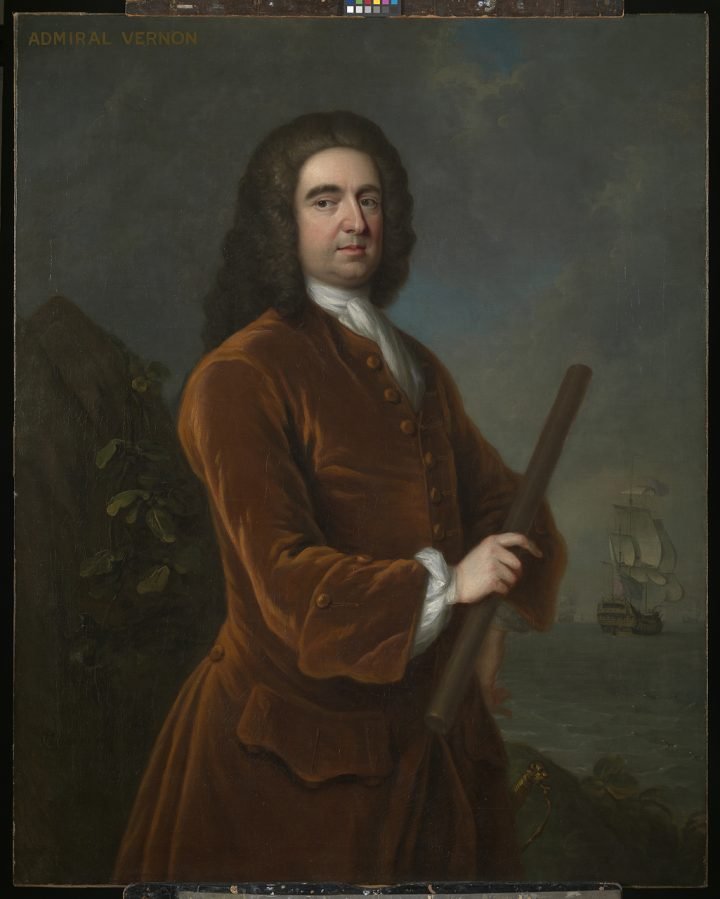 This month we are commemorating the 50th Anniversary of the End of the Tot, when the daily rum ration was issued for the final time on 31st July 1970. This discontinued a tradition within the Royal Navy stretching back several hundred years, whereby sailors received an issue of beer, wine, or spirits twice a day.

In the eighteenth century the type of alcohol issued generally depended upon where in the world a ship was stationed (rum for the West Indies, beer for home waters, and wine for the Mediterranean). It is worth noting at this point that the beer ration was abolished in 1831, in favour of rum, when at the time the Navy was constructing a new brewery in Plymouth (the Brewhouse still standing in the Royal William Yard) which never actually brewed any beer. Conversely, the Government at the time was legislating against spirits consumption in favour of beer (my thanks to the Honorary Secretary, Andy Plumbly, for bringing this interesting point to my attention).

The term ‘grog’ dates back to the 1740’s, during the the War of Jenkins’ Ear, when Admiral Edward Vernon, who commanded ships in the West Indies, first ordered issuing of the mixture that would become known as ‘grog’. The word is derived from the type of coat that Vernon chose to wear (uniform not being standardised at this stage in history) which was known as a ‘grogram’. This earned him the nickname of ‘Old Grogram’, and the method described below became the standard way of serving the rum ration throughput the Royal Navy.

These two letters were sent by Vernon to his captains from Port Royal, Jamaica ordering the diluting of the rum ration. The mixture would eventually consist of rum, water, sugar, and lime juice, the latter supposedly to assist in the combating of scurvy amongst the Ships’ Company’s (rum itself was believed to have anti-scorbutic qualities, which perhaps may have led to the decision to abolish the beer ration as mentioned above).

Order to Captains, Burford, at Port Royal, August 4, 1740Whereas the swinish vice of drunkenness is but too visibly increasing in our mariners in his Majesty’s Service, attended with the most fatal effects both to their morals and their health, from whence arises a brutal disregard to their duty as Christians, and their being thoughtlessly hurry’d into all sorts of crimes as well as being visibly debilitated and destroy’d in their constitutions, which it may be justly apprehended is owing to their drinking their allowance in spirituous liquor at once, and without any mixture to allay the heat of it, which of itself is sufficient to intoxicate and gradually destroy them.

And it is of the utmost consequence both for his Majesty’s Service and the preservation of their morals and lives that some remedy should be provided against so growing an evil and of such dangerous consequence both to their souls and bodies. And you are hereby required and directed to consult with your Surgeon and to make me a return in writing severally under your hand and his, how you think so growing an evil may most effectually be remedy’d, it being as I apprehend greatly for his Majesty’s Service as well as for the preservation of the men’s morals- and health that some speedy remedy should be apply’d to cure so dangerous and growing an evil.

And you will take into your consideration whether their spirituous liquor being mixed in some due proportion of water daily when it is issued to them, or any part of it being abated for a proportion of sugar being mixed with it for making it more palatable, may not be in some sort of a remedy to it, and will give your opinions with that care and consideration as the spiritual and temporal welfare of your fellow subjects as well as his Majesty’s Service may require of you.

Order to Captains, Burford, at Port Royal, August 21, 1740Whereas it manifestly appears by the returns made to my general order of the 4th of August, to be the unanimous opinion of both Captains and Surgeons, that the pernicious custom of the seamen drinking their allowance of rum in drams, and often at once, is attended with many fatal effects to their morals as well as their health, which are visibly impaired thereby, and many of their lives shortened by it, besides the ill consequences arising from stupefying their rational qualities, which makes them heedlessly slaves to every passion; and which have their unanimous opinion cannot be better remedied than by ordering their half pint of rum to be daily mixed with a quart of water, which they that are good husbandmen, may, from the saving of their salt provisions and bread, purchase sugar and limes to make more palatable to them.

You are therefore hereby required and directed, as you tender both the spiritual and temporal welfare of his Majesty’s subjects, and preserving sobriety and good discipline in his Majesty’s Service, to take particular care that rum be no more served in specie to any of the ship’s company under your command, but that the respective daily allowance of half a pint a man for all your officers and ship’s company, be every day mixed with the proportion of a quart of water to every half pint of rum, to be mixed in a scuttled butt kept for that purpose, and to be done upon deck, and in the presence of the Lieutenant of the Watch, who is to take particular care to see that the men are not defrauded in having their full allowance of rum, and when so mixed it is to be served to them in two servings in the day, the one between the hours of 10 and 12 in the morning, and the other between 4 and 6 in the afternoon.

And you are to take care to have other scuttled butts to air and sweeten their water for their drinking at other times, and to give strict charge to your Lieutenants in their respective Watches to be very careful to prevent any rum and all spirituous liquors being privately conveyed on board the ship by your own boats or any others, and both you and they must expect to answer for the ill-consequences that may result from any negligence in the due execution of these orders.

Neil Jackson is a serving Warrant Officer 1st Class in the Royal Navy , and is an Aircraft Controller by specialisation, currently in HMS Queen Elizabeth. He has a BA(Hons) in History from the Open University, and is the Editor of the Members’ Blog.