The Rum Ration – For the Love of Grog! 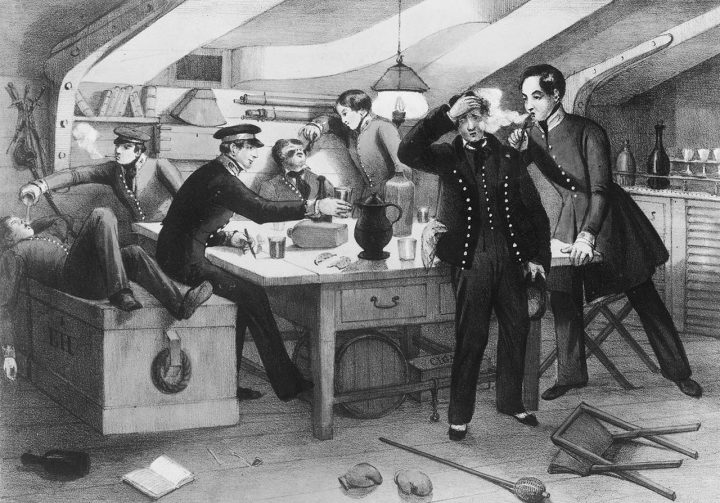 This month we are commemorating the 50th Anniversary of the End of the Tot on 31st July 1970, when the daily issue of rum in the Royal Navy was discontinued. Previous to this date, sailors received up to half a pint of strong spirit issued in two measures daily, to coincide with the main meals of the day. Along with the ubiquitous tobacco, sailors were kept reasonably contented by their ‘grog’, and ready to face whatever aspect of life at sea was thrown at them on any given day, all at the expense of the Crown!

However, this policy of state-sponsored inebriation did inevitably lead to widespread drunkenness throughout the service, with the attendant disciplinary issues as a result. Also, feeding men a steady supply of alcoholic beverages whilst at sea for years at a time led to a great degree of dependency on the ‘grog’, which no doubt shortened the life expectancy of your average mariner.

A hilarious record in the archives can be found in the recollections of Commander James Anthony Gardener, who served through many of the most memorable campaigns during the Age of Sail. This volume, whose authors’ include one of the co-founders of the NRS, John Knox Laughton, contains a rich array of anecdotes on the characters encountered during Gardner’s career. As the authors point out in the introduction, ‘the most striking feature of the portraits is the universal drunkenness’.

There are many parts of this volume that can be included in this blog, and I’ve selected the below extract mostly for the purpose of brevity; the volume itself is well a read in its entirety. Gardner’s recollections offer an abundance of material to the naval social historians amongst us, with a hugely informative level of detail of the lives of the men who he served with during a 39-year long career.

The bullocks were very small, and here I must relate a droll circumstance. Our purser’s steward was one that dearly loved grog, and it so happened that on the day the bullocks were slaughtered, he got beastly drunk. Some of the midshipmen seeing him in that situation in the first watch, lying near the steward room, agreed to sew him up in one of the bullocks hides, which was accordingly done. The horns being on, were fixed to a nicety on his head and fastened under the chin, firm as a rock.A little before twelve he came to himself and got up (for his legs and arms were free) and tried to get into the steward room, but the key was secured. He then began to bellow, just as the quartermaster came down to call the watch, and was knocking his horns against the bulk head, his tail near the cockpit ladder. The quartermaster, holding up his lantern, looked at him for some time in amazement; at last, letting it fall, he took to his heels, swearing that the devil was in the cockpit; while those who slept abaft on the lower deck jumped out of their hammocks and followed his example.’Twas a most laughable sight; particularly so when the officer of the watch came down to see what was the matter and, evidently under the influence of fear, did not venture down the cockpit ladder until one of the midshipmen came up and said it was Colquhoun, the steward, transformed into a bullock. It had a good effect on the steward, as he was afraid ever after to bouse his jib up; and whenever he put his head up the cockpit ladder, those on the lower deck would sing out, ‘ What’s become of your horns?’

Neil Jackson is a serving Warrant Officer 1st Class (Aircraft Controller) in the Royal Navy, currently assigned to HMS Queen Elizabeth. He has a BA(Hons) in History from the Open University, and is the Editor of the Members’ Blog.