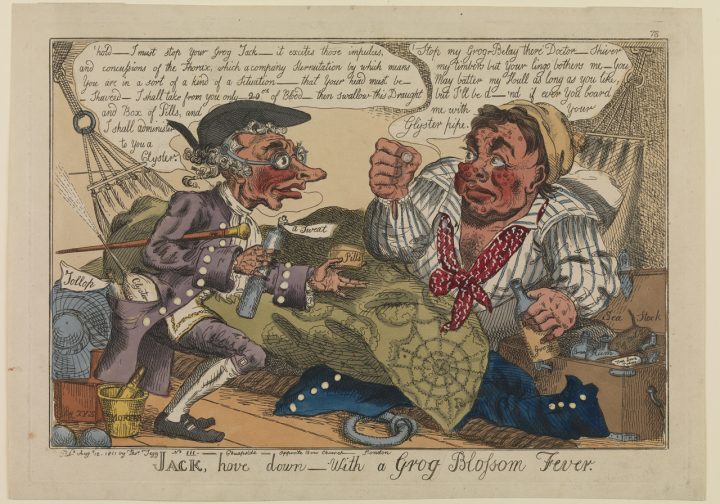 The above cartoon from 1811 by the British publisher and bookseller Thomas Tegg (1776-1846) makes fun of the British sailors’ fondness for drinking. ‘Jack’ is shown in his hammock, surrounded by bottles of grog. National Maritime Museum: PAF4157

Providing the necessary food and drink for thousands of men in naval ships was a permanent headache for the Admiralty and the issues they faced rolled with the seasons. One of the problems they faced was that the need to produce and stockpile victuals never disappeared and yet the ability to produce and stockpile quality victuals changed with the seasons – particularly for beer which tended to spoil quickly and easily if brewed in the heat of summer. This letter, from the Victualling Board to the Admiralty secretary, written in the depths of winter but with an eye to the victualling problems that the summer would pose in 1748, presents for the first time an idea of using ships of the Ordinary to stow beer brewed at the ideal time – in winter and spring. It is also an interesting letter as it shows a clear example of good and effective communication between the Admiralty and the Victualling Board. This was not always the case – but in the winter of 1747, it was.

Victualling Board to Admiralty Secretary 1 February 1747/8Being very desirous not to lose any of the proper season for brewing at Plymouth but to get as large a stock of beer in store as possible before the coming in of the hot weather so as to prevent as far as may be the occasion for brewing during the summer extreme heats, but our storeroom at the said port not being sufficient to contain such a quantity as we should be desirous of having beforehand for the said purpose, and it being hardly possible to procure more, we pray you will please to move the … Admiralty that our Agent at the said place may have liberty to lodge such beer as shall be brewed more than our stores can hold on board one of his Majesty’s ships in Ordinary there. … [This] may also frequently contribute to the dispatch of the service, as it may often happen that supplies of the said species may be more expeditiously sent from her to the rest of his Majesty’s ships victualling at that port than can be done from the shore.

Dr Sam Willis is the Online Editor of the Navy Records Society and one of the UK’s best known historians. Sam has made more than ten multi-part TV series for the BBC and National Geographic. He presents The Mariner’s Mirror Podcast, the world’s no.1 podcast dedicated to all of naval and maritime history.