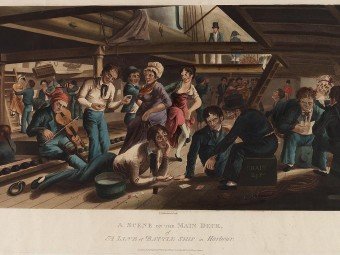 The idea behind this volume, according to its editor Brian Lavery, was to give a rounded picture of life at sea during the age of sail. It concentrates on the daily routine of shipboard life rather than more dramatic events such as battles and mutiny. It supplements other volumes produced by the Navy Records Society, notably Five Naval Journals 1789-1817 (vol 91, 1951, ed H G Thursfield) and The Health of Seamen (vol 107, 1965, ed C C Lloyd.)

The selection begins in the second quarter of the eighteenth century because, stated Brian Lavery, ‘there are no suitable documents from earlier periods’ and closes in 1815, when the navy entered a new era with the advent of steam and a long period of peace.

One of the most important aspects of shipboard life was that it was intensely self-contained, especially in the later part of the age of sail. After the conquest of scurvy, ships were able to stay at sea for many months at a time and the world-wide battle for empire caused them to make very long voyages, often away from their home bases over a period of years. Even in port seamen often stayed on board and shore leave was not in any sense a right. This volume throws a spotlight on the way in which a crew of up to 850 men could be crammed into a small space for many months at a time, and the ways in which they were fed, clothed, allocated space for eating and sleeping, at the same time as they were organised for sailing and battle duties.

It contains separate sections dealing with Admiralty Regulations, Captain’s Orders, Medical Journals, discipline and punishment. It also includes an extensive glossary of the nautical terms and descriptions of the time.

Brian Lavery was born on 18 July 1945 in Scotland. After graduating he worked first as a teacher, then in the printing industry, before fulfilling his interest in maritime heritage as an author, consultant and curator. He worked at the Chatham Historic Dockyard on the Wooden Walls exhibition and for 14 years at the National Maritime Museum where he developed the modern collecting policy, working on such exhibitions as Seapower and All Hands. He was historical consultant to Peter Weir’s film Master and Commander: The Far Side of the World. He was awarded the Desmond Wettern Maritime Media Award in 2007, and in 2008 the Society for Nautical Research’s Anderson Medal.