This month sees the centenary celebrations of the Battle of Jutland, fought at the end of May 1916. The build up to the battle can only be understood within the context of the allied naval operations in the North Atlantic as well as those in the North Sea. This book, our 2003 Volume , The Maritime Blockade of Germany in the Great War: The Northern Patrol, 1914-1918 explores the history of the Northern Patrol, perhaps the most constantly active Royal Navy vessels in the Great War and a barely acknowledged yet vital component in the eventual Allied victory.

The Maritime Blockade of Germany in the Great War: The Northern Patrol, 1914-1918 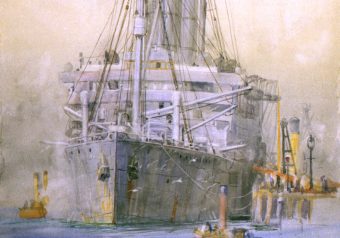 The Tenth Cruiser Squadron of the Grand Fleet had the task of patrolling the seas between Scotland and Greenland to intercept enemy ships trying to escape into the ocean and merchant ships who could be carrying goods destined for Germany. This was a task of great political sensitivity, since almost all the ships intercepted were neutrals, and requiring great physical endurance from ships and men in the violent North Atlantic.

The Maritime Blockade of Germany in the Great War is a comprehensive collection of the records of the Northern Patrol. It consists of regular reports of the admirals in command, to which are added other relevant official records, and more informal documents. There are the chatty letters of Captain Vivian and HMS Patia, the appalling experiences of young officers placed in barely seaworthy sailing ships to see that they went into port for examination, the patehtic ‘mutiny’ by a bored, distressed and underpaid black gang, the diary of Able Seaman Style, demonstrating the tedium of the patrol, and the self-satisfied diary of Dr Shaw.

There are also the casualities: ships overwhelmed by storms, sunk by enemy action, torpedoed. The ships of the Patrol were perhaps the most constantly active Royal Navy vessels in the Great War, a barely acknowledged yet vital component in the eventual Allied victory.