The Naval Miscellany, Volume IV: Documents Illustrating the History of the Spanish Armada 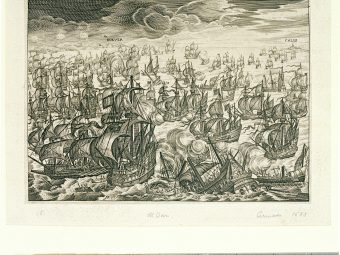 George Naish was born in 1909 the son of a keen amateur maritime archaeologist, the Rev. Francis Naish. He was educated at St. Edward’s, Oxford and Southampton University and joined the National Maritime Museum in 1935, soon after it was established. He joined the Royal Navy Volunteer Reserve in 1940, ending his service in command of the Anti-Submarine Fixed Defence Station, Fort Agami, Alexandria, 1945-1946. On demobilisation he transferred to the Royal Navy Reserve, in which he became a Lieutenant-Commander. On his return to the Museum in 1947 he became Hon. Secretary to the Society of Nautical Research, a post he held for 30 years. He attained the rank of Keeper in 1969, and in 1971 he became Historical Consultant to the Director shortly before retiring. He died in 1977.
He translated summary accounts of the war at sea by German officers in 1947. He was an adviser on various films and TV series, e.g. the 1957 series The Adventures of Peter Simple.