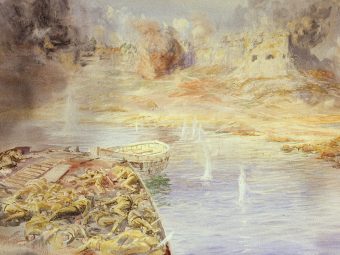 This edition contains documents from the seventeenth century to the Second World War. There is additional material to complement NRS Volume 116 from the Commission of Enquiry in 1608, an account of the Earl of Warwick’s voyage to the Mediterranean in 1627 and documents relating to the management of the Royal Dockyards between 1672 and 1678.
There is an account of Benbow’s last battle and ensuing court martial in 1702, orders and correspondence relating to landings on the French coast in 1758, papers relating to operations in the Leeward Islands during the Seven Years War, letters from a naval captain from Portugal and the Mediterranean during the Napoleonic Wars, operation orders and reports relating to Copenhagen in 1807, letters from a midshipman in the Far East between 1818 and 1822, the capture of Bomarsund in 1854, a Committee of Inquiry relating to the Admiralty office in 1855, officers’ correspondence on the Dardanelles Campaign and, finally, the memoirs of a paymaster in the Royal Australian Navy, in both WWI and WW2.

Paul Halpern was born in New York 27 January 1937, and graduated from the University of Virginia in 1958 with honours in History. He served in the US Army 1958-60, reaching the rank of First Lieutenant. He entered Harvard University in 1960, where he gained an MA in History in 1961 and in 1966 his PhD, with a two volume thesis on The Mediterranean Naval Situation. He spent his entire academic career at Florida State University at Tallahassee, starting as an instructor in 1965, rising to assistant professor in 1966, associate professor in 1970, and professor in 1974. On retiring in 2005 he became emeritus professor. In 1986-87 he served as visiting professor of strategy at the Naval War College in Newport Rhode Island.