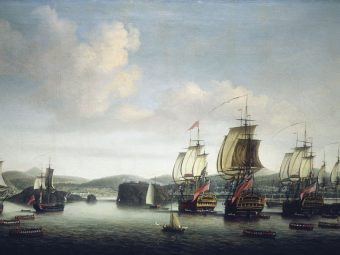 Born 12 November 1949 in Arundel, Sussex. Educated at Ampleforth College, and University College, Oxford, where he earned a PhD for his thesis on Naval Policy and cruiser design, 1865-1890. He served at the Public Records Office 1974-1991 as Assistant Keeper of Public Records, and resigned so as to start writing a Naval History of Britain, with the support of the National Maritime Museum, the Navy Records Society and the Society of Nautical Research. He was Anderson Senior Research Fellow 1992-98 at the National Maritime Museum. In 1999 he moved to Exeter University as Senior Lecturer and in 2000 became Professor of Naval History. In 2007 he was elected a Senior Research Fellow of All Souls College, Oxford. He was Hon. Secretary of the Navy Records Society 1976-1990, a member of the Society of Antiquaries from 1985, a Fellow of the Royal Historical Society from 1980 and a Fellow of the British Academy from 2003.

He is currently writing the third and final volume of his trilogy on British naval history. The first two volumes were both highly acclaimed. He was awarded the Julian Corbett Prize in Naval History in 1982, and in 2005 both the Duke of Westminster’s Gold Medal for Military Literature and the British Academy Book Prize. In 2011 he was named the first Hattendorf Prize Laureate.