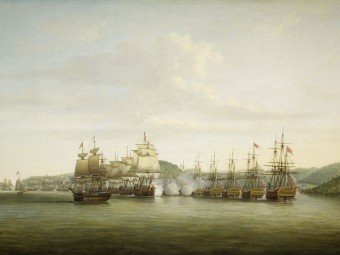 The Fourth Earl of Sandwich was First Lord of the Admiralty (for the third time in his long career) from 1771 to 1782. Blamed by the Whig opposition for many of the disasters of the American War, he was additionally loaded by 19th-century Whig historians with the false image of a corrupt libertine.

It was the publication of these volumes of his correspondence and papers (then in the family home, now in the National Maritime Museum), covering the years 1771 to 1782, which restored his reputation as a conscientious and imaginative naval administrator and reformer, especially of the dockyards and of the timber question. Without entirely rescuing his status as a strategist, they showed very clearly the weaknesses at the heart of the North administration which damaged its handling of the war, and undermined Sandwich’s efforts.

A fifth volume intended to cover his handling of naval patronage was overtaken by the war.

Sir George Barnes was born on 13 September 1904 in Byfleet, the son of the lieutenant-governor of Burma. He went to the Royal Navy College, Osbourne and then BRNC Dartmouth, but was rejected by the Royal Navy because of poor eyesight; He later attended King’s College, Cambridge University between 1922 and 1927, reading history. He then taught at Dartmouth until 1930. After a spell at the CUP, he joined the BBC in 1935 as a Producer in the Talks Department. In 1946 he was promoted to be the first ever Controller of the new BBC Radio Station, the Third Programme until in 1950 he became a Director of BBC TV. He was knighted for overseeing the Coronation broadcast in 1953. He retired from broadcasting in 1956 becoming Principal of the University College of North Staffordshire, now Keele University. He died at Keele on 22 September 1960.

John Hely Owen was born in Yorkshire in 1890, the son of a solicitor. He entered the Royal Navy in 1905, and became a Midshipman in 1907 and a Lieutenant in 1912. He was second in command of the submarine C5, in the North Sea in 1916, and then commanded the submarine H1 alongside the Italians against the Austrians in the Adriatic, 1916-1918. Subsequently he commanded submarine L4 on the China Station, was second-n-command of the cruiser Calliope, 1925-1926. He served in the Naval Intelligence Division, 1931-1933, but retired as a Commander 1932. He served in the Naval Historical Section of the Admiralty, 1939-1945, writing battle summaries to provide guidance for admirals and their staff. He died in 1970.

He wrote historical articles for The Naval Review from 1925 and a confidential history of mutiny in the Royal Navy in 1933(classified until 1973).