Views of the Battles of the Third Dutch War 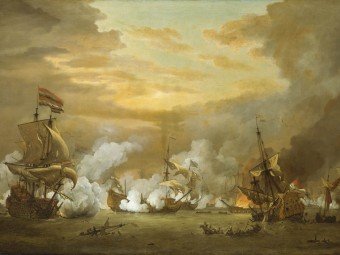 This was a unique excursion in the Society’s history, being not a conventional volume but a portfolio of ten coloured drawings of the battles of Solebay and the Texel, with an explanatory pamphlet attached.

Complete copies are very rare, most having been broken up for framing.

Julian Corbett was born on 12 November 1854 was educated at Marlborough College and Trinity College, Cambridge where he took a first class degree in law, becoming a barrister in the Middle Temple in 1877, practising until 1882, when he turned to writing, starting with historical novels about the Tudor period. He died on 21 September 1922.

In 1896 he accepted an invitation from John Knox Laughton to edit a volume of documents on the Spanish War of 1585-87, and he soon became known as one of the Royal Navy’s leading intellectuals. From 1901 to 1922 he wrote regularly on naval strategy and history. From 1902 he lectured at the Royal Naval College Greenwich (founded in 1900). In 1903 he gave the Ford Lectures at Oxford University. In 1905 he became the Admiralty’s unofficial adviser on strategy, serving as secretary of the Cabinet Historical Office. He was knighted in 1917, and awarded the Chesney Gold Medal in 1914.

Like Mahan Corbett saw naval warfare as part of a nation’s larger policies, and was influenced by Clausewitz and Laughton. Unlike Mahan he placed less emphasis on fleet battle, which upset many in the Royal Navy. He set out to formalize the theories and principles of naval warfare, focusing on the art of naval warfare, defining the differences between land and naval warfare. His principles of sea control, focus on the enemy, and manoeuvre for tactical advantage still form the foundation of today’s naval manoeuvre warfare. Through his lectures at the Naval War College Corbett was trying to convey to those attending his ideas on limited war and strategic defence, which were very different from the accepted norms of naval theory and strategy of the time.